You are what you eat. Plenty of us have heard this saying before. As college students, it’s important to start thinking about how this is relevant to us. 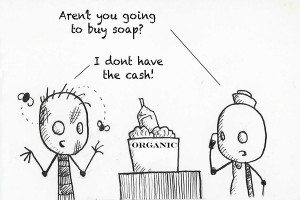 In the long term, it is important to nourish our bodies with healthy foods like fruits and vegetables instead of cookies and chips. And we all know the healthy foods tend to be the expensive ones. But, is spending the extra money necessary for every trip to the grocery store?

As college students on a budget, we think not.

However, experts found that organic produce costs between 13 and 36 cents more per pound. It doesn’t sound like a big increase, but it adds up over the course of a year.

Some students don’t notice the difference between organic, non-organic, GMO-free and vegan products anyway, so why would they spend the extra money? They’re more likely to spend discretionary funds on alcohol…let’s be honest.

If you’re at least making an attempt to eat healthy and take care of your body, that’s what counts.

Meeting ends midway and sometimes purchasing food and products that are organic, and not necessarily GMO-free and vegan, is always a good alternative. But acting like lunch meat and non-organic, GMO foods will instantly poison you, seems to be going overboard.

At this point in our lives, many of us aren’t financially stable enough to make the choices we’d prefer, especially if the bank account is perpetually empty.

A majority of us are pinching pennies just to make ends meet until we graduate. Stateuniversity.com reported that of the 75 percent of college students holding jobs while attending school, they are making about $645 each month on average.

For a majority of us, rent in Marquette is around $400 per month.

Then we have to consider the goal of spending no more than $50 per week on groceries. But let’s be honest, that’s tough to accomplish when adding in the healthy alternatives we’d hope to be buying.

For those who are able to buy organic, locally grown foods on a normal basis, we commend you. For now, our goal is to at least put forth the effort in eating healthy. What’s that other saying? Oh yes, it’s the thought that counts.