The academic senate is considering a proposal that would involve the incoming class of 2016 to have a language competency graduation requirement. 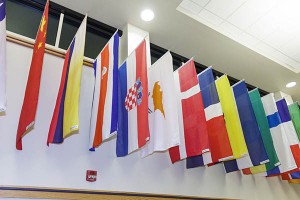 The academic senate is composed of 39 NMU professors and four students that serve as representatives for their departments. The proposal was brought to the senate in mid-October from the Department of Modern Languages and Literature in collaboration with the Center for Native American Studies. The proposal suggests that a graduation requirement be added to the new general education program for the 2016 incoming freshmen that would be satisfied by successfully completing a foreign language at a 102 level or higher.

There are various ways this could be satisfied other than taking eight credits worth of a foreign language.

By earning an Advanced Placement (AP) score of at least a three on an AP test for a foreign language, earning a passing score on the College Level Examination Program (CLEP) or earning a C- or better on a final exam for a 102 level language class would prove language competency. Native speakers of a foreign language can request an exemption as well.

Assistant Spanish professor Lupe Arenillas, Ph.D, is the representative for the language department on the academic Senate.

“We really feel language is an important part of your education and it really opens your mind,” Arenillas said. “You need it because it’s a language, you learn a lot about the culture and the people, you really get to step out of what you know to open your mind. It makes you a different person.”

The proposal is the second attempt for the Department of Modern Language and Literature. According to associate professor of Spanish Michael Joy, an earlier proposal called for all students to take at least one course even if they were advanced. The first proposal was heard by the senate last spring and focused on making language a requirement rather than as a competency, which is a crucial difference, Joy said.

“Now it’s similar to the math competency requirement,” Joy said. “You have to have a certain level of math to graduate from Northern, which was passed by the senate last year, no questions asked. We’re just asking for a low level of skill in a language.”

While the proposal did develop in the Department of Modern Languages and Literature, the department expanded the proposal to include the Center for Native American Studies.

According to Martin Reinhardt, Ph.D, an assistant professor in the Center for Native American Studies, they decided they wanted criteria regarding their Anishinaabemowin language to be included and that competency would be decided there rather than in the Modern Language Department.

Reinhardt said concerns about credit requirements and integration into the general education system as well as merit of the proposal arose in the Senate. He does however believe that there was interest and support in general.

“I think diversity is an important topic here on our campus and I think people realize language is an important component of diversity,” Reinhardt said. “From an American Indian perspective, it is very important here because it’s the native language of what we now refer to as Marquette, Mich.”

Joy said students should be thinking further than the job market, which knowing a language will help with. Getting a job is important, Joy said, but so is the quality of the education.

“I don’t think higher education is just about getting a job,” Joy said. “Getting a job is important but we’re also building an interesting life and I think that’s what the proposal helps students with.”

Arenillas saw it as an opportunity to have something unique in the educational background without adding additional work. She said it is being incorporated directly into the general education program. She understands that students are concerned that they won’t need a foreign language in their field.

“There are plenty of jobs that don’t need it, but it will always be something extra for you to have.” Arenillas said.

Reinhardt also touched on the fact that having a well-rounded education is more important than just getting a job.

“If this was just about getting a job, you can get a job without knowing a whole lot,” Reinhardt said. “But if you want to have a good, quality education, it seems that you’d want to be a more well-rounded student, which is what I think general education is about and I think that’s what diversity is about, becoming a well-rounded, higher quality, critical thinker.”

Arenillas said she enjoys having science majors and other non-language majors in her classes because of how well-rounded they are and can be.

“I see some of my students who do science, I have some in the honors program and they’re just amazing students, they have the best of both worlds,” Arenillas said. “They’re well-rounded.”

With a good education in mind, Joy reflects on his own personal experience with collegiate language requirements and how it only benefited him, though he wasn’t so eager at first.

“I remember when I was a student, I didn’t necessarily like all the decisions the professors made, but now I’m grateful,” Joy said. “I started as a physics major and because of a language requirement, I started studying Spanish and that obviously affected my life in a very positive way.”

Though the professors only see the benefit of the competency proposal, some students at NMU are seeing the exact opposite side.

ASNMU president Katerina Klawes said there is mostly opposition for the proposal.

“Over 90 percent of the student feedback received has been in opposition of the proposal,” Klawes said. “About 30 student statements have been turned into ASNMU and are on record while more are being collected.”

Freshman biology major and ASNMU college of arts and sciences representative Brianna Wright said she feels it is hard to learn a new language and that credit hours will build up for students.

“It’s kind of hard to learn a new language and we’re not sure if two classes will really prepare them to fluently speak in the real world,” Wright said. “Another reason is it could potentially add credit hours so we’re not sure if they’d have to stay longer at NMU.”

Klawes said some concern falls under it not being important to certain students careers.

“A lot of students feel that maybe a foreign language isn’t applicable to their career and that’s the general reason for opposition,” Klawes said.

Wright said though it could add credits, it will help when looking for jobs after college.

“It makes an applicant in the work field a strong applicant and adds to their application,” Wright said.

Klawes’ biggest concern falls under the fact that she does not yet have adequate feedback from the students. In order to reach maximum student participation, campus wide emails will be sent  and representatives are handing out the proposal and asking for written feedback. This is important because ASNMU will use their four votes in academic Senate accordingly to the student body’s wishes.

With negative feedback from students, the professors are concerned that they don’t have all the facts of the proposal. According to Joy, most enjoy the classes.

“Student evaluations in the language classes are in general, extremely high,” Joy said. “There just is not a general understanding of what we do.”

Reinhardt said he would be suggesting to table the proposal until the General Education Committee (GEC) has had more time to clarify questions and concerns at the next senate meeting.

Feedback is important to both ASNMU and the faculty. To give feedback, email ASNMU at [email protected] or stop into room 1203 of the University Center. All statements will be confidential.