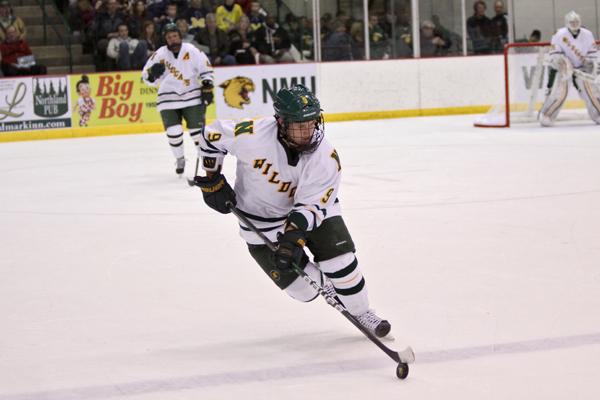 The NMU hockey team took one out of four possible conference points in a tie and a loss in a home series against the Bowling Green State University Falcons this past weekend.

The two teams skated to a 5-5 tie Friday, Dec. 5 at Berry Events Center. Sophomore defenseman Brock Maschmeyer scored two goals in the game, including the game-tying goal with 3:21 remaining in regulation that would send the game into overtime before ending in the tie.

Head coach Walt Kyle said the ’Cats were a victim Friday night to their previous travel.

“Friday night is always a tough night after a trip to Alaska,” Kyle said. “You’re mentally fatigued and it feels like you’re chasing. We were fortunate to tie the game and get the point…we won a third period when we were tired, and that’s indicative to the character we have.”

NMU sophomore goaltender Mathias Dahlstrom stopped 37 of 42 shots in the game, while Bowling Green’s junior goaltender Tommy Burke stopped 28 of 33 shots. Both the ’Cats and Falcons were one for two on the power play.

The Wildcat offense wasn’t able to generate the same scoring the following night, as Burke shutout the NMU in a 5-0 Bowling Green win Saturday, Dec. 6 in Marquette, Mich.

Dahlstrom stopped 24 of the 29 pucks shot his way in the loss, while Burke was perfect on 26 shots.

Kyle said stepping up on offense is the key moving forward from the loss.

“We have to have some of our guys that we expect to provide offense start providing it,” Kyle said. “Bowling Green played really well. We lost 5-0, but we were better tonight than we were last night. we had some great opportunities that we just didn’t finish on. We’re not going to dwell on it…you just have to hit the reset button.”

“They’re a very good team,” Kesti said. “They took advantage of the opportunities they got and we had some unfortunate bounces. In the first two periods we played a lot more like we should, but they capitalized on our turnovers, which is a sign of a very good team.”

Bowling Green’s freshman defenseman Mark Friedman, who was drafted to the NHL Philadelphia Flyers 86th overall in the 2014 draft, was held to one point in the two game series, which he earned Saturday on an assist.

Friedman said the key to playing NMU’s Dahlstrom was to generate traffic around the net.

Friedman said the WCHA competition is stepping stone towards the NHL.

“This is just like professional hockey right now,” Friedman said. “The speed is up there and the players have the ability. It’s really good hockey, and hopefully it helps me get to the next level.”

The ’Cats will play their final series of the 2014 year next weekend as they travel to the Bemidji State University Beavers at 7:07 p.m. both Friday, Dec. 12 and Saturday, Dec. 13 at the Sanford Center in Bemidji, Minn.