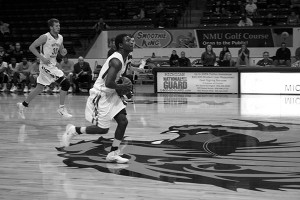 Sophomore forward Brett Branstrom said the win was a result of team chemistry.

“We just played really well as a team,” Branstrom said. “We rebounded and defended well, and it was more of a grind out victory. Our shots weren’t falling.”

The ’Cats went on a 19-9 run in the final minutes of the game to clutch the win at the free throw line.

Sophomore forward Trevin Alexander for the Lakers ranks third in the GLIAC for rebounds averaging 7.8 per game.

The Bulldogs are undefeated in GLIAC play this season with a 4-0 record in the conference and 12-2 overall.

Sall said he is still fond of his former players at Ferris.

“A lot of the guys on the team right now are guys that I recruited,” Sall said. “I have relationships with them from the past, and I think last year was a little bigger deal because it was so fresh and so new playing them. They’re not only good players, but really good people, but when it comes time to go compete you have to let it all go from there.”

Last season, the ’Cats and Bulldogs split their two-game season series, with the home team winning each contest.

“We’ve fought and stuck together this season, now we just have to keep pushing for the win,” Mattison said. “It’s just preparing everyday. We’re going up against two good teams that have definitely been good for a long time, but our defense is going to get us every win.”