In honor of Martin Luther King Jr. (MLK) Day, NMU cancelled classes and approximately 115 students took the time off to volunteer and make a difference with one of the activities planned by the Center for Student Enrichment (CSE). 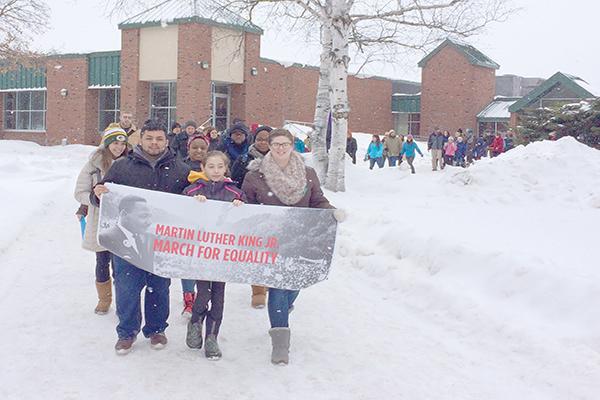 The Multicultural Education and Resource Center (MERC) partnered with the CSE and the President’s Committee on Diversity to bring a wide variety of activities for all to participate in on Monday, Jan. 20.

The CSE primarily focused on organizing the wide range of skill-building activities that took place both on and off campus. Students had the chance to participate in six different activities.

Two skill builders focused on homelessness in Marquette by offering an orientation session for Room at the Inn, a rotating homeless shelter, and painting at the Janzen House, a low-income housing facility.

Two other skill builders let creativity flow by creating fleece blankets and knitting hats and gloves for the Women’s Center and making greeting cards for veterans and the elderly.

Mike Schneck, one of the Volunteer Center coordinators, said the turn-out was better than expected.

Schneck said on Friday, the numbers were as predicted, around 50. By the time Sunday evening arrived, he said over 100 people were registered to attend at least one of the skill-builders.

Schneck believes the connection with the community helps get people motivated to volunteer.

“I think Northern does a great job of emphasizing a sense of community, be it in our dorms or with certain clubs or organizations that people work for,” Schneck said. “I think that today is based around diversity and community as well, and having those healthy connections with the Marquette community fuel people up to volunteer.”

Molly Smith, sophomore elementary special education/emotional impairment major, attended the Room at the Inn orientation and said she was excited to be a part of it.

“My favorite part of the skillbuilder was getting to hear about all of the different services that Room at the Inn offers to its guests,” Smith said. “It is more than just a rotating homeless shelter.”

Along with the skill builders offered, an equality march paraded through campus, starting at 12:30 p.m. in the Payne-Halverson lobby, moving all the way to the Peter White Lounge in the University Center.

This was organized by the President’s Committee on Diversity and the MERC.

Rachel Harris, director of the CSE, helped set up the event and found she was most excited to be a part of this particular aspect of MLK Day.

“There’s something about the symbolism to feel like you’re really standing up for your convictions and your beliefs,” Harris said. “Whether there’s a lot of people doing the march or a few, many people watching or not, it’s just an individual thing for me and I really enjoy being a part of that. It’s rewarding.”

The Associate Director of the MERC and main task force for the march, Shirley Brozzo, said it was very important that students not only take the day to give back but really understand what MLK wanted to achieve in his dream.

“Some people show up for the march, but have no idea why they’re participating or they don’t show up because they don’t have any idea what the civil rights movement was or is about,” Brozzo said. “Students need to learn this part of history, because it involves everyone, not just African American people, and it isn’t over yet.”

Following the march, presentations were given in the Peter White Lounge not only by NMU students reading famous and original poems or works, but by faculty, staff and members of the community.

“Maya Angelou’s poem really represents how I want to be as an African American woman,” Klitzke said. “A strong woman who stands up for her rights with the utmost respect.”

MLK Day would not have been successful without the help of the volunteers and the partnering offices, said Schneck.

“We would like to thank all the volunteers that came out today and gave their time for this cause, the President’s Committee on Diversity as well as the MERC and Simply Superior,” Schneck said. “We’re proud of our university for being cognizant and realizing this is an important holiday and for helping this day of service run smoothly.”