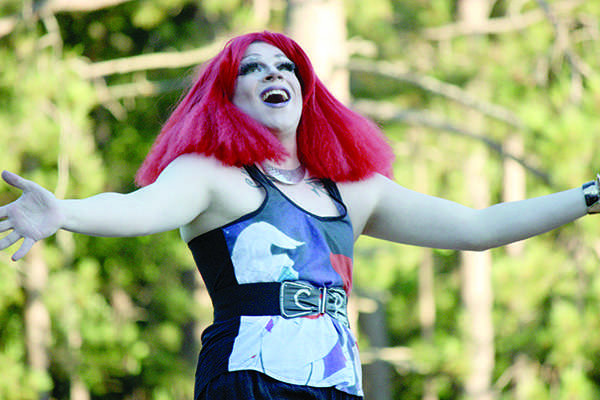 Senior sociology and graphic design major Stefani Vargas Harlan, the head of the show’s committee, said that her and the committee have been planning these shows since December of 2013.

“A drag show is basically a dance recital, lip sync and beauty pageant all together,” Harlan said. “They are beautiful, dramatic and to the extreme.”

As the show marks its 19th year, Austin Lemoine of Marquette, who will be performing as Aurora Gozmic on Friday, said drag has become more accepted.

“Drag was always looked down on in the past, especially by the gay community,” Lemoine said, “But now, drag is becoming more well known and is more about being artistic and showing off your talents.”

An amateur show will be held at 7 p.m. Thursday, Jan. 22 in the Michigan Room of the University Center. Approximately eight amateur drag men and women will be dressing up and showing off their talents in front of judges.

According to freshman Katelyn Craghead, another member of OUTlook, over 200 people attended the amateur show last year and she does not expect any less this year.

“Anyone can enter the amateur show, and if they win, they will win a cash prize and compete with the professionals the following day,” Craghead said.

To enter into the amateur show, competitors are advised to bring the music to accompany the performance on a CD to the Michigan Room in the University Center by 5:30 p.m. Thursday, Jan 22. The professional event will be held at 8 P.M.

Friday, Jan. 23 in the Vandament Arena.

Lemoine, 21, who prefers the pronoun ‘they,’ has been in drag since they were 16 years old but had their first performance in drag at NMU’s amateur competition when they were 18. Throughout their career, Lemoine has participated in shows in the Marquette area as well as Chicago. Lemoine will be one of the judges scoring the amateur competition.

Lemoine was in theatre in high school and loves being able to play a role that is completely different from themselves.

“I love being on stage and entertaining people,” Lemoine said. “I think of us (drag queens) as kind of circus clowns. We are there to make you think, laugh and enjoy yourself.”

It takes Lemoine nearly three hours to finish their transformation make-up for their face alone. About another hour of their time is designated to getting fully dressed in costume. Lemoine finds that being a part of the sequence and glamour is one of the most interesting parts of drag.

“I also really love traveling and meeting so many new people along the way,” Lemoine said.

Throughout Lemoine’s career as Aurora Gozmic, they have encountered many different talents. They have seen people breathe and juggle fire, hang from hooks, dance and lip sync.

“I started out with a very punk style,” Lemoine said. “I always wore leather and dressed a lot like Gaga, but now I perform to more underground music and wear a lot of high fashion gowns.”

When planning this show, Harlan and her committee started by booking professional performers. According to Harlan, it costs around $8,000 to bring the professional drag kings and queens to NMU for this show. This year there will be seven queens and two kings.

Craghead said these shows bring something new to the Marquette community.

“The shows bring more attention to the LGBT community and spread diversity throughout our campus,” Craghead said.

Harlan said nearly 2,000 people attend the professional show every year. She said that it is a celebratory event for OUTlook and they enjoy bringing the community together.

Groups that helped OUTlook organize the show this year include Q&A, the Northstar Rugby Team

and Double Trouble DJs. The Northern Lights A Cappella group will be the opening act of the evening on Friday.

Senior music education major and Director of the Northern Lights A Cappella group Jacob Barnby said they will be performing three songs this year.

“This show gives our group great exposure,” Barnby said. “We get to perform in front of thousands of people and we are looking forward to it.”

Sophomore secondary special education major Baylee Jones said the Northstar Rugby team has been asked to be security for the show the past few years. As security, the team makes sure that nobody sneaks in and nobody goes backstage.

“I like seeing people express themselves,” Jones said. “I choose to help with the show so that I can help people do that.”

While Jones is looking forward to the mind blowing routines, Barnby said the show has a great atmosphere.

“Everyone is really excited to be at the show,” Barnby said.

The amateur show on Thursday is free to everyone. Entrance to the professional show on Friday is free to NMU students and $5 for the public.