Walking through the halls of Jamrich, students are now bombarded with university advertising covering the walls in large, professional, corporate-looking posters. 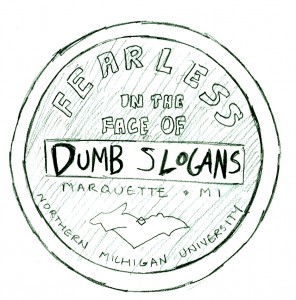 It feels like NMU is becoming Any College Town, USA. NMU’s unique identity, before its rebrand and marketing, pulled many of us to Marquette in the first place.

The new image doesn’t appeal to everyone, but the new branding campaign might offer more appeal than “come to the arctic where there are three major roads and produce costs double from November to April.”

Having covered enrollment before, we can tell you the statistics show a school that is sick and needs help. Our retention rate, frankly, does not imply Fearless Minds. But admittedly, the quality of promotional materials has improved.

However, the thing on our minds when contemplating the changes at NMU was how these changes, especially in image, will affect the campus culture.

The consulting firm that developed the rebranding campaign had no connection to the Upper Peninsula. On one hand, that strategy makes sense: people who have no reason to come here should create the brand that would attract them. On the other, it reflects an erosion of public input to a public institution.

There’s no reason to discourage the administration from taking the university’s image into the 21st century, and they have certainly achieved that. It’s great to see unique success stories of students and faculty that have come and gone from NMU and we appreciate the emphasis on quality academics.

But we fear NMU emphasizing academics less than image.

The demographics will change thanks to shifting access to higher education—whether or not rebranding is responsible is unclear. The high quality video and marketing is something we aren’t used to up here—some feel that it doesn’t represent the current student base—but whatever the rebranding is attempting to do doesn’t change the fact that Marquette is unique. The community and geographical location will still draw a certain type of person, whether a fearless mind or not. NMU’s effort to diversify the student body is important to staying competitive.

No matter what, the university has to adapt or at least change the image occasionally so NMU doesn’t look po-dunk.

But if administration thinks that better PR without visibly improving academics will attract a more diverse student body, then perhaps Mindless Fears would be a more apt slogan.