NMU implemented a preferred name policy this semester and it is only the first step for ASNMU members who are trying to create a more transgender-friendly policy. 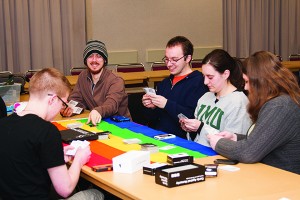 The preferred name policy is a movement amongst colleges nationwide to allow all students to identify with a name that may be different than what is on their birth certificate. Colleges across the country are trying to address gender issues.

ASNMU President Katerina Klawes said this is especially significant to transgendered students who prefer a name that matches the sex they identify with rather than the gender they were born with. Klawes said the current policy could be seen as outing and demeaning for students.

“It’s very outing, which is also a very demeaning condition for students,” Klawes said. “It makes it very obvious that the student is transgendered, and it’s very important to recognize students for who they are and how they like to be addressed.”

Stefani Vargas Harlan, the president of the LGBTQ student organization Q and A, said the group was excited to partner with ASNMU on the preferred name policy project.

“It’s a change I’ve been trying to get through personally since living in the dorms many years ago,” Vargas Harlan said. “It’s really great to see it come to fruition, and it wouldn’t have happened without ASNMU.”

Klawes said she has received no criticism regarding the preferred name policy, which is a first in her presidency. The feedback she has received is positive and mostly centers around similar thoughts that the policy is a right for students.

“This is a right students have been denied,” Klawes said. “Students have the right to, first of all, be addressed how they would like and also to have a safe and comfortable living situation.”

Sheila Williams,  ASNMU general studies representative, said they’d been working on transgendered policies for a while.

This included the beginnings of a separate project of gender inclusive housing, an idea that gender would not be accounted for when choosing a living situation on campus in order to avoid outing a transgendered student who wished to identify and live with the gender they preferred.

Currently, no policy is in effect and it is dealt with on a case-by- case action. ASNMU has passed a resolution in favor of gender -inclusive housing, showing the university they support it.

Now a university subcommittee will be formed to decide how best to implement the policy if the board of trustees passes the policy.

Jessica Gula, ASNMU college of business representative, said that both policies are helping break the gender restriction, a theme they are committed to bringing forward.

“It’s the biggest thing in our process. We don’t want to label people and put them in strict groups,” Gula said. “We’re either labeled male or female but you could also feel neither, both or one you weren’t born as.”

Williams added that gender is seen as two areas when there are actual areas between male and female.

“When you’re talking about gender, it isn’t binary,” Williams said. “It isn’t just black or white, there are levels of gray between them.”

The preferred name policy serves more than just the transgendered community. Gula used herself as an example of someone outside the target who is positively affected by it.

“For me, on my birth certificate, my name is Jessica but I have never identified myself as Jessica, everyone who really knows me calls me Jess,” Gula said. “Everytime I go into a new classroom I ask them to please call me Jess, so after this semester I’m going to be using the preferred name policy.”

Gula said this helps her relate to a transgendered individual in terms of real identity.

“I personally feel like your name is directly linked to your identity, and to be called something you don’t identify with is almost dehumanizing,” Gula said.

Awareness for transgendered college students has been a priority of both Gula and Williams in their time with ASNMU. They have been working with OUTlook, one of the campus LGBT groups, to isolate problems. They hope to eventually provide more gender-neutral bathrooms on campus in addition to moving forward with the gender inclusive housing plan.

Vargas Harlan was appreciative of the help this campus community has received in enacting these policies from ASNMU.

“Without ASNMU this wouldn’t have happened,” Vargas Harlan said. “They magnified our voices in the loudest way to take a huge step with this, and this is something that we’ve been trying to get passed for a really long time.”

Betsy Lehman, vice president of Q and A, said there is a proportionately large trans community at NMU compared to bigger schools in Michigan.

“It’s definitely a community that is underserved on campus and underrepresented,” Lehman said. “Hopefully this can change that because it’s not a safe campus, and this is a huge step forward in making it one.”