Given recent events that unfolded two weeks ago involving several University of Michigan (UM) fraternities and sororities, there is some speculation and assumptions being made about college Greek life. 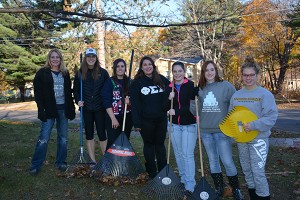 Six Greek organizations from UM were suspended for causing more than $100,000 total in damage to Treetops Resort in Otsego County and Boyne Highlands in Emmett County. The resorts are currently seeking criminal charges according to the Detroit Free Press.

Greek organizations at NMU, however, claim to be nothing like that.

“It was absolutely absurd,” said senior communications and graphic design major Ben Simon, the president of the fraternity Tau Kappa Epsilon (TKE) at NMU. “It was a case of a fraternity going wild and it was completely irresponsible.”

NMU Greeks are focused on providing social events, being involved on campus and increasing leadership and group skills within their members. However they are also heavily focused on doing community service and philanthropic activities. TKE’s national philanthropy is St. Jude’s, and they raise money to donate to that organization. Each year they do a tub push at the end of the school year from Sault Ste. Marie to Marquette.

Another fraternity on campus, Alpha Sigma Phi (AΣΦ), also expressed distaste at the actions of the Greek community at UM.

“If this incident would have just been everyday students, it would have never hit national news,” said senior accounting and criminal justice major Ben Drymon.

Drymon is the president of the NMU chapter of AΣΦ and they represent five different organizations for their five ideals of the fraternity. Rape, Abuse and Incest National Network (RAINN) (Silence), Ronald McDonald House (Charity), Humane Society (Purity), Big Brother Big Sister (Honor) and Homes for our Troops (Patriotism).

Currently AΣΦ is planning a fundraiser in April for RAINN, hoping to get other organizations to donate small amounts for every signature they receive on campus.

Drymon added, “These men and women are my family, by choice.”

Not only fraternities but sororities at NMU are also dedicated to volunteering and service events. NMU Panhel (governing body of sororities) president and junior special education major Brittany Heckathorn, a member of Kappa Beta Gamma (KBΓ), said that the sorority has a national philanthropy, the Special Olympics, and a local one, the Women’s Center. KBΓ has two big events in the spring related to Special Olympics, which are the Polar Plunge and Relay for Life. In the fall, they volunteer at the Women’s Center auction, which raised over $18,000 this year.

“I love volunteering a lot, a lot, a lot,” Heckathorn said. “I also love finding girls who want to spend time to raise money to help others.”

Senior speech language and hearing major Amber Barnum and president of Phi Sigma Sigma (ΦΣΣ) said that their sorority sponsors School and College Readiness, and they have just pledged to donate to two charities: Practice Makes Perfect and the Kids in Need Foundation.

ΦΣΣ participates in events to raise money such as the Snowshoe 5K, which last year was held at the Marquette Golf Course in February, and filling backpacks with school supplies to donate.

“The best part is growing in the sorority and watching everyone else grow around you,” Barnum said. “It’s the coolest part ever.”

“Go for it,” Wallace said in regards to students considering going Greek. “There are ways to try and go through and get a taste of each organization and the wonderful experience not many people are a part of.”