Theft and larceny at the PEIF remains an ongoing issue for the winter semester at NMU. Lt. Don Peterman from NMU Public Safety said that since August, the PEIF has accounted for 61 percent of theft or larceny reported at the university, with 23 reports of theft or larceny occurring. 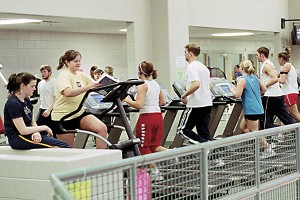 “The contributors have not changed,” Peterman said. “It comes down to people taking responsibility for their property. Since the fall and start of the winter semester there have been 11 reports of theft.”

Peterman said the primary way to prevent theft at the PEIF is the need for people to store and lock their belongings and property in the university’s lockers.

“What they need to know is that if you leave your belongings in an unlocked locker, you stand the risk of losing it,” Peterman said. “We cannot place cameras in the locker rooms.”

However, some students do not want to pay for the lockers provided at the PEIF. Cameron Bohling, a senior industrial maintenance technology major, said he has been going to the PEIF for over four years.

“I don’t hear much about theft and I know a lot of people who go there,” Bohling said.

Bohling said he usually carries his items with him or puts them in the trays of the machine he is using while at the PEIF so he doesn’t have to leave a bag unprotected.

“To have a permanent locker is like $60 and there is no way I want to pay that,” Bohling said. “If I had my stuff stolen, it would encourage me to buy a locker, but the price sucks. I guess a phone is worth more than $60 though.”

Peterman said people should stop leaving property unattended anywhere in the PEIF or leaving it on the ground as somebody might pick it up and walk away with it.

“If you were to walk through the PEIF you would observe property unattended all over the place waiting for someone to come help their self to it,” Peterman said. “Our thefts include, wallets, purses and cash left on the hallway floors and locker rooms outside of lockers and unlocked lockers.”

Adam Mattord, a senior secondary physical education major, has been going to the PEIF since he arrived at NMU.

Mattord said he doesn’t use the lockers at the PEIF because of the rental cost. He said he has had money stolen from him on two separate occasions while at the PEIF.

Mattord said he still leaves his items on the floor or in the locker room while visiting the PEIF.

Mattord also said he has  heard from friends that items had been stolen, however he said he does not think that theft at the PEIF is a concern.

“I really don’t think about it all that much,” Mattord said. “It has actually gotten better since I first got here.”