The ASNMU Talent Show will make a return from the past at 7:30 p.m. Friday, Feb. 20 in 1100 John X. Jamrich Hall.The last time ASNMU hosted the show was in the 1990s. When the idea of the talent show came up, the members of ASNMU became excited about revitalizing old traditions, said senior communication studies major Spencer Deering. 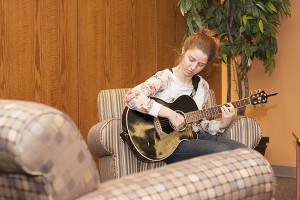 “We have a lot of talent here at Northern to put on display,” said Deering. “It’s important for students to appreciate their classmates talents and it’s something that’s been overlooked.”

ASNMU has been heavily promoting the event on campus by putting up posters, creating a facebook page and talking to residence hall governments. An email was sent out to all students inviting them to “show off” their talents at the show and detailed information on how to sign up. ASNMU also took to talking about it verbally while handing out ice cleats on Monday, Feb. 16 in the Academic Mall. Tags advertising the talent show were attached on the ice cleats being passed out.

“Passing out the ice cleats was something we did last semester and we thought that doing this again would be a good idea to spread and promote this talent show,” Deering added.

So far there are nine performers, and ASNMU is looking to add more. One of these performers is junior English writing major Mariel Murray. Murray will be singing and playing her guitar. She’s sang since she was five years old and has performed at the Meadowbrook Detroit Symphony Orchestra.

“It’s good to put my guitar and my singing voice to use and to sing to an audience besides my shower head,” said Murray. “Singing is more my talent, the guitar is more of an accessory.”

ASNMU expects to have 300 people there, but are hoping for more, said ASNMU President Katerina Klawes.

“It’s an activity that will foster campus community and pride,” Klawes said. “It’s good to be a part of the different showcasing of the talent of students on campus. This is the first revival of the talent show since the 1990s.”

There will be two awards, a crowd favorite and a judge favorite. Performers will be put before a panel of three judges, two of which includes Deering and Jim Cantrill, head of the communication and performance studies department. The performers will be judged on their skill, the difficulty of the song or act and how prepared they seem to be.