Students fight to save professor’s job

A group of students have taken to traditional methods like letter-writing and petition-signing to protest their beloved professor’s contract termination.

After the announcement of English professor Jason Markle’s contract termination, along with others, junior English writing major Mariel Murray and sophomore English writing major Sophia Novak, decided to draft a letter to support Markle staying at NMU by gathering personal student and faculty testimonial. Both Murray and Novak have had two classes with Markle, and he is their academic advisor. 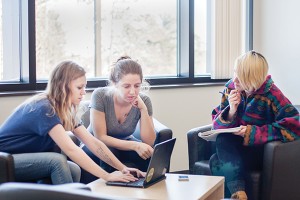 Murray said that a friend recommended Markle as a professor and that she took his fiction writing class during the winter 2014 semester. She said it was clear to her right away that Markle was passionate about helping students.

“What makes Jason stand out the most to me is that I haven’t had any other professor prepare me for the world outside of school as much as he has,” Murray said. “I had never been encouraged by another professor to try and get published as an undergraduate.”

Novak was an undeclared major when she took her first English class with Markle. After a meeting with Markle in which he encouraged her to follow her passion for writing, she declared her English writing major.

“He’s influenced where I’ve gone with my work and the way I write and think,” Novak said. “He’s very inspiring and the reason I’m going to such an extreme is because any student should have the opportunity to take a class with him, spend time with him and learn from him. Every moment of his class was well worth my time.”

A core of six students, supported by two faculty members, met Friday, Feb. 20 to begin writing and reviewing the letter. Other students reached out through Facebook and email to support their efforts. An email address, [email protected], has also been created for anyone to submit testimonials about Markle to contribute to the letter.

“I think that the student voice needs to count a lot more than it does right now,” Novak said. “If we can get a strong group of students together to support that he needs to continue teaching here because he’s fantastic, then I think we’ll have a shot to create change.”

Markle completed both his undergraduate and graduate degrees at NMU and has been teaching at NMU since the fall of 2001. He began as a teaching assistant, taught as an adjunct for three years and has been a term contract professor for five and a half.

He is a half year from being considered for a continuing contract position.

Nationally, universities are trending toward hiring more adjunct professors, or contingent faculty, and creating an imbalance of tenured, contract and adjunct faculty in university departments.

Brent Graves, a biology professor and member of the American Association of University Professors (AAUP), said it is estimated that three fourths of all U.S. higher education faculty are now contingents.

Three reasons Graves said he thinks universities are hiring more contingent faculty is for flexibility in staffing and for short-term assignments. However, according to Graves, members of AAUP’s Committee C for contingent issues calculated that the average duration of employment at NMU for tenured or tenure track faculty is 11 years, while the average for contingents is eight years.

“Clearly, short-term appointments are not the reason for contingent hires at NMU,” Graves said.

Graves said another possible reason universities are hiring more contingent faculty is as a cost saving method. When referencing Graves’ calculations, tenured faculty make four times more than contingent faculty, not including benefits. He also said that NMU has the lowest salaries in the state among similar universities.

“Universities can pay faculty a lot less if they hire them part time at low wages without benefits,” Graves said. “This is the same business model that Wal-Mart uses.”

Markle agreed that one of the reasons contingent faculty are more prevalent is due to cost; however, he said he feels this doesn’t benefit the university.

Term professors, who are full time, must reach a sixth year to be eligible for continuing contract status, also a full time position. Markle was told his contract would not be renewed after this year after spending five and half years as a term professor. Markle said it’s frustrating because he feels some people don’t know how much service work and teaching ability term and continuing contract professors offer a university.

Without term and continuing contract professors, some classes are going unstaffed in the English department, Markle said, causing tenured professors to take on an overload of courses and spend less time on professional development.

“I work with a lot of wonderfully intelligent people who are doing great things in their field and so to ask them to stop doing that, to take on extra courses when the department is down professors, and teach extra courses really sucks,” Markle said.

Acting Provost Lesley Larkin said the ratio of contingent to tenure-earning and tenured faculty varies between academic departments and also depends on union contracts. She said the central mission at NMU is to educate students by putting the best instructors available in the front of the classroom, and this is often done by hiring tenured professors.

“Our faculty are our most important resource,” Larkin said. She added that overall, the university has to provide as much support and stability to faculty as possible, while also retaining enough flexibility to respond to changing enrollments and student and faculty needs.

Markle agreed that tenured professors provide both recognition for the university and a high quality education to students, but said completing national searches for the best tenured candidates doesn’t happen as often as it should.

“The number one goal should always be trying to fill tenured positions with national searches because that is best for any department and university in terms of prestige,” Markle said.

“We are talking to as many professors and people in power as we can to learn about policy,” Novak said. “We want to be accurate as far as policy goes because that’s probably going to be the biggest battle for us.”

Markle could have an opportunity to return to NMU as an adjunct professor, however, this job title change results in far less pay, no benefits and teaching only beginning- level courses. Novak said this would affect the amount of insight he could offer students, decreasing office hours and one-on-one time with students.

Murray and Novak feel that quality teaching should be one of the most important factors in deciding which professors stay at the university.

“They haven’t watched him captivate classes, so our main argument is that Jason is worth it,” Murray said. “He’s worth being fairly compensated and we fear that if he has to worry about finding a second job, he wouldn’t be able to perform as well as a professor.”

An online petition for Markle was also started. As of Wednesday, it had 141 signatures. (here petition URL: http://www.ipetitions.com/petition/petition-to-renew-jason-markles-contract)