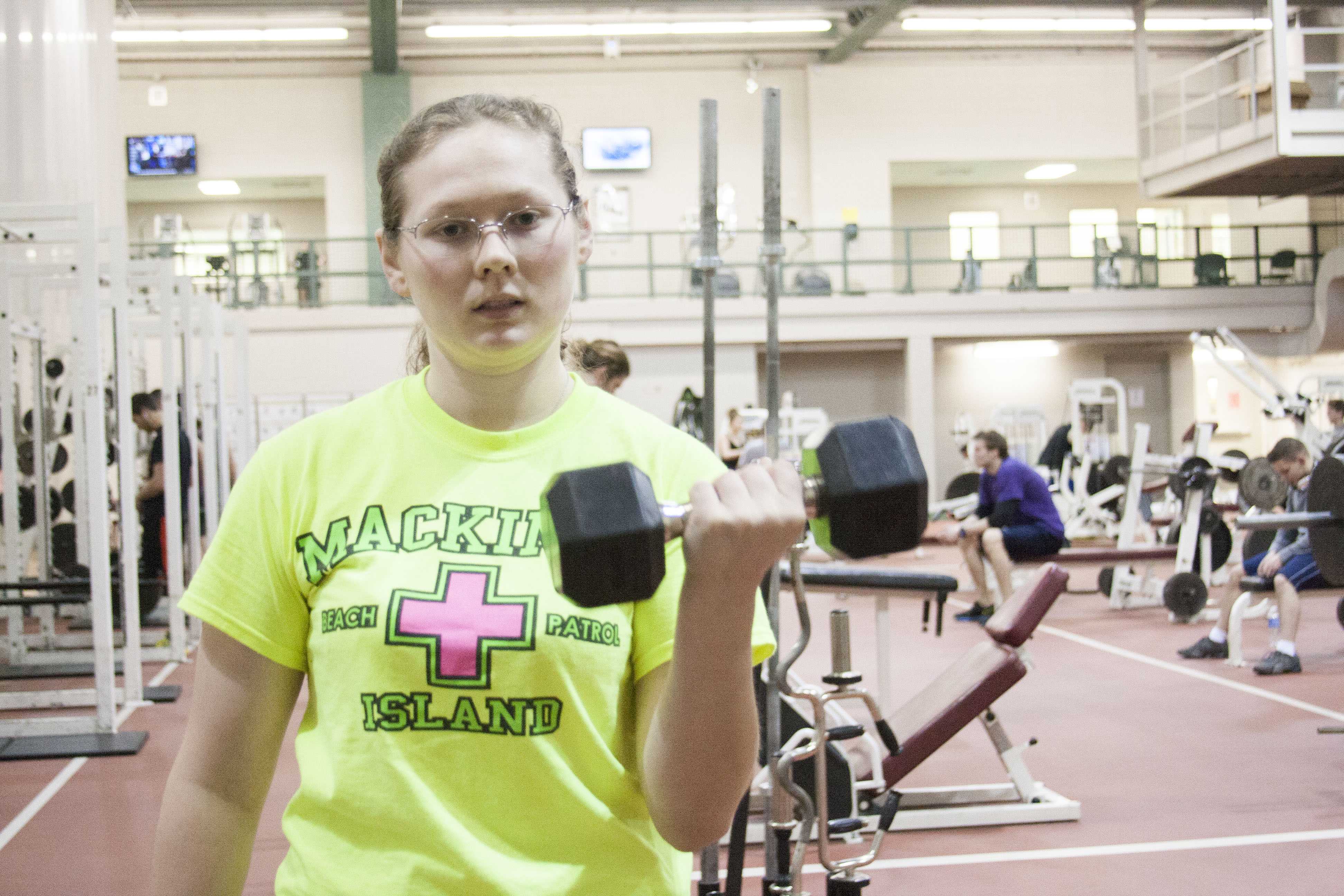 Any typical day, walk into the PEIF and you will hear the thumping of feet on the treadmills, squeaking sneakers on the two basketball courts and the clanging of weights. For anyone who ventures far enough you discover weight machines and beyond that, a terrifying prospect; the free weights section. With all the men grunting as they bench press and the complicated-looking equipment, many women stay as far away as possible.

Is it just intimidating compared to the elliptical where a few buttons are pressed? Or is there a stigma attached to women lifting weights?

“I don’t know how to use the machines and I don’t like the looks I get from others while I’m there,” Simmon said.

The weight room at the PEIF is occupied predominantly by males, no matter the time of day or day of the week, which can be daunting for any female according to senior secondary special education major Morgan Stenz.

“There is a negative stereotype based on whether you are going into the gym for the first time or you go every day,” Stenz said. “People are going to see you in a certain way, which is sad. Gender roles may be keeping girls from entering the weight room. They may feel a strong girl isn’t what men seek or do not want to come across as intimidating by working out or weight training. Women may get stuck in those gender roles, but I would encourage them to go for it and have fun.”

Sometimes women do overcome fear, knowing what they want and stepping up to the challenge, but other times stereotypes and intimidation hold women back, according to Randall Jensen, a professor in exercise science.

Senior communication studies major Holly Krzeminski said, women should not worry about what others think about us.

“You’re not going to have to answer to them at the end of your life,” Krzeminski said. “People may say ‘she is too this’ or ‘she is too that,’ but it’s not about what someone else is saying. It’s based on how you feel about yourself and giving honor where it’s due.”

Women who lift weights may wonder what men think about them being in the weight room. Although Stenz cannot answer for every guy, he said it is awesome to see women weight training.

“Anytime anybody is in the gym working out, it’s exciting to see the dedication,” Stenz said.

Sometimes the weight room is viewed as a “guys’ only area,” but  everyone is very welcoming, said Katie Theut, the Information Recreation/Fitness manager at NMU.  The PEIF offers classes to instruct students on how to properly weight lift and use the equipment.

“We want to create a welcoming environment [at the PEIF] and not have any barriers,” Theut said. “Depending on the day, there will be more males than females, but definitely more females are in here than what I’ve seen in the last 15 years.”

At one time, women were not allowed to participate in sports, let alone weight train. This changed in 1972 with Title IX, which prohibited discrimination based on sex in education programs and activities, explained Jensen.

“Weight training was deemed ‘socially unacceptable’ and women were seen as the weaker sex,” Jensen added. “In certain cases women are stronger than men, especially in the legs, whereas men are stronger in the upper body.” He said the gender roles and stereotypes are from years ago, which have changed some but still exist today.

You might worry there’s something unfeminine or “unladylike” about pumping iron or perhaps there is a misconception that it will give you bulky muscles. However, strength training is important for your general fitness and well-being, according to Jensen. Many of us step into a gym to “get into shape” or shed some extra pounds.

“For some women, they think weightlifting means they will gain weight instead of lose it,” Jensen said. However, weightlifting boosts the metabolism causing women to lose fat.

Physically, women and men will remain different. When the question of who is physically stronger arises, the answer lies in hormones. Jensen said men and women have both hormones, testosterone and estrogen, but men have more testosterone than women, which helps build muscle mass.

Women do get stronger and see an increase in muscle mass, but due to lower levels of testosterone, their gains will not be the same as men. In certain cases, women are stronger than men, especially in the legs, whereas men are stronger in the upper body.

Due to women having less testosterone in their bodies, they will not get big and bulky, no matter what they do naturally. Weightlifting does help the body lose fat because it helps build up the metabolism, but you also need to clean up your diet according to Krzeminski. Women tend to focus on the scale influencing their identity as well.

“A number should not be who you are. There is more to you than your weight,” Krzeminski said. “Also, muscle weighs more than fat.”

Krzeminski, a member of the NMU-OTS, Northern Michigan University Olympic Training Site, said weightlifting was something that did not come naturally.

“It took a lot of practice, but weightlifting was a challenge and that’s why I love it,” Krzeminski said.

“They view themselves as strong women, not just physically,” Jensen said. “They gain a sense of accomplishment, since it is something that they can do for themselves.”

Additional physical benefits include the release of endorphins, sleeping better at night, a better appetite and the body will crave healthier foods.

Women may be afraid of stepping into the weight room but sometimes you need to do things that are scary, added Krzeminski.