‘Cats and Dogs scratch for home ice in regular-season finale 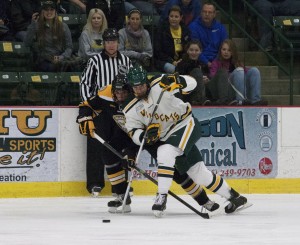 The 2014-15 WCHA season will wind down this weekend with the NMU Wildcats participating in a home-and home series with their U.P. rival, the No. 4-ranked Michigan Tech Huskies.

NMU head coach Walt Kyle said he expects this weekend’s series to be another installment to the classic rivalry.

“It should be a great series, anytime it’s Tech and Northern this is the best series is in college hockey,” Kyle said. “Both communities love it, both universities love it, it’s always a tough, hard fought series and I expect nothing less than that.”

The series will start at 7:07 p.m. Friday, March 6 at MacInnes Student Ice Arena in Houghton, before wrapping up at 7:07 p.m. at Berry Events Center in Marquette.

More than bragging rights will be on the line this weekend however, as both clubs have the opportunity to climb the WCHA standings and secure home-ice in the first round of the WCHA playoffs next weekend.

The Michigan Tech Huskies are 19-5-2 in conference play this season, sitting second out of 10 teams in the WCHA with 40 conference points. The Huskies are three points behind the first place Minnesota State University-Mankato Mavericks, who will be playing the Bemidji State University Beavers in Bemidji this weekend. The Huskies have clinched home ice in the first round of the playoffs, and will be hosting their first home playoff game in over two decades.

The Huskies will need a series sweep over the Wildcats as well as Bemidji sweeping the Mavericks in order to pass Minnesota State in the standings and win the regular season WCHA title.

As for the Wildcats, the Mavericks-Beavers series has great implications for them as well. The Wildcats, who are 11-11-4 in conference play this season, currently sit fifth in the WCHA with 26 conference points, one point behind the fourth place Beavers who hold the final home playoff seed.

NMU will need to gain two points more than the Beavers do this weekend to pass them in the standings and host the first round of the playoffs at Berry Events Center.

Michigan Tech head coach Mel Pearson said the Huskies understand the ’Cats are capable of beating them this weekend despite their spot in the standings.

“Northern has something to play for in home ice, and we all want to get home ice obviously so it’s going to be a tough weekend,” Pearson said. “They play well from the net-out. I know they’ve had some injuries, but the guys they’ve inserted have played extremely well. They’re well-coached, they work hard, they’re tenacious and they’ve got skill. It’s going to be a heck of a weekend, and anytime [Tech and NMU] come together, you can throw the records out. It’s going to be some hard fought games.”

The Wildcats took the first series against the Huskies earlier this season, as the two teams skated to a 3-3 tie Friday, Jan. 10 at Berry Events Center, before an overtime goal from senior defenseman Mitch Jones gave the Wildcats a 5-4 win the following night in Houghton.

“It will be a battle, and that’s what you look forward to,” Kesti said. “These are the games that are going to be like the playoffs, and they are the playoffs for both teams, so it should be a great time.”

Starting sophomore goaltender Mathias Dahlstrom has missed playing time the last five weeks due to an injury sustained against Alaska Anchorage on Jan. 30, and his status moving forward is uncertain. Junior Michael Doan has filled in between the pipes as his replacement, and on the season Doan has racked up a 2.77 goals-against average and a .915 save percentage in 15 games played, 13 started.

The Huskies have the WCHA’s top two point leaders in senior forward Tanner Kero, who has 41 points off 17 goals 24 assists, and junior forward Alex Petan, who has earned 38 points from 14 goals and 24 assists. Tech’s junior goaltender Jamie Phillips leads WCHA goaltenders in save percentage at .934, while also recording a 1.80 goals-against average. Phillips was pulled against the ’Cats Saturday, Jan. 11 after letting in two goals after the first period.

Baker said the Huskies are the perfect opponent to end the regular season of his senior year against.

“Being here for four years, Michigan Tech has always been my favorite team to play,” Baker said. “With the battles it’s always been a good rivalry, and I couldn’t be happier to play them.”

If the ’Cats are unable to pass the Beavers in the standings this weekend, Saturday will be the seniors’ final home game as a Wildcat.

Kesti said he will always have fond memories of playing for the Wildcats at Berry Events Center.