Enrollment is falling sharply again at NMU, as indicated by the tenth day enrollment count obtained by the North Wind.

In an email sent to faculty members, Dean Michael Broadway listed the current headcount at 7,710, a decline of 314 students since last winter, marking a trend of winter declines two years in the running. 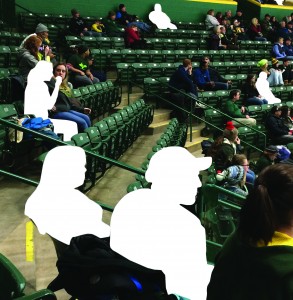 “The competition for this declining market is fierce,” Broadway wrote. “There are a number of initiatives underway to stabilize enrollment in the form of improved retention, an improved continuation rate, new academic programs and VP for extended learning.”

The university has not made an official statement addressing the long term effect that reductions in enrollment will bring, however Broadway wrote that he believes there will be a campus forum held in the near future to discuss possible implications.

Derek Hall, assistant vice president for identity, brand, and marketing, said he had not seen the most recent report, but expressed that declining enrollment should be concerning for everyone at NMU.

While Hall mirrored Broadway’s remarks regarding university sponsored initiatives designed to staunch the losses in enrollment, he also offered one explanation for the most recent drop:

When reached for comment, Steven Neiheisel, vice president for enrollment management and student services declined to discuss the matter, and instead suggested an appointment to meet with him directly.

On Monday, March 9, The North Wind received a letter from President Fritz Erickson encouraging the editorial staff to reach out to faculty at NMU who can assist in maintaining the accuracy of a story.

“Simply take the time to ask, and we will do anything we can to help,” Erickson said.

When presented with the latest headcount data, one student expressed concern that the future of the university may be jeopardized by a corresponding drop in revenue if enrollment continues to fall, and whether declining enrollment might have an effect on prospective students choosing to attend school at Northern.

“As a freshman, you’d have to think where the school is going to be when you’re a senior.”

Other schools have faced dire consequences as the result of continuing student population declines.

Sweet Briar College, a 114- year-old private women’s institution will shut its doors this summer on the heels of an 8 percent drop in enrollment between fiscal year 2009-2010, and more recently in 2014-2015, according to data supplied by InsideHigherEd.com.

In spite of a large influx of applications, offers of discounts and other incentives, the college was unable to remedy the malaise that had afflicted it for years.

Sweet Briar had a student population of nearly 1,000 when it suffered a rapid decline.

Admittedly, Sweet Briar was not as large as NMU, nor does it have the benefit of state funding to beef up the school’s bottom line.

Yet, NMU’s 4 percent drop is half the rate of Sweet Briar’s 8 percent, a statistic that NMU administrators like Broadway and Hall have said they are keeping a close eye on and taking measures to combat.