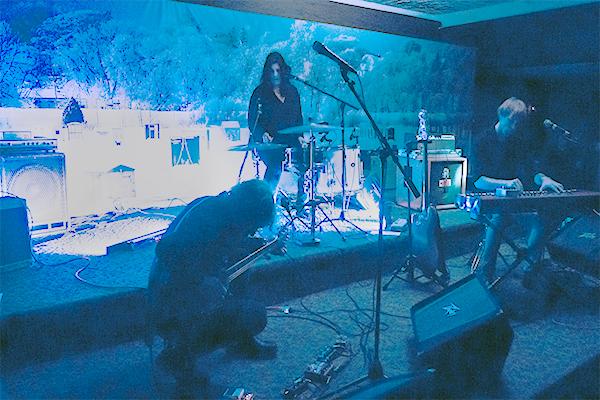 I made it to Gladstone, Mich. early afternoon on Friday, Feb. 20 jammed in the back seat of the first in a series of many Toyota Corollas I’d find myself packed tightly in over the next several days. The music didn’t start until 9 p.m., but after entirely missing the last Premier Rock Forum (PRF) Thundersnow, a three-day independent music festival at the Terrace Bay Inn, and a large portion of the year’s before that, I promised myself I’d catch as much of this weekend as I could.

Three years ago, Jeff Fox, a Chicago-area resident, and his husband, who grew up near Gladstone, began planning one of the most important music events in the Upper Peninsula. Thundersnow takes place over a weekend in mid-February and features national, regional and local acts spanning a myriad of musical genres. There were people that had traveled from overseas just to be at the show. Even so, not too many people around the area know it exists.

When I first heard of Thundersnow I didn’t think it was real. I checked out some of the bands and thought there was no way something like that could happen in such an obscure part of Michigan. Being from Marquette, I was used to hearing about these so-called “music festivals” happening around the U.P. all the time. The ones where a bunch of 80-year-old substitute teachers play “The Wreck of The Edmund Fitzgerald” to a bunch of drunk dads in their lawn chairs. But these were good bands, playing original music, and less than an hour from my hometown. It seemed too good to be true.

PRF began as the message board for Electrical Audio, Steve Albini’s recording studio based out of Chicago. Its membership is composed of a group of likeminded musicians and technicians discussing topics ranging from studio recording to tips on internships and interning in the modern world of audio production. The festival began as a way for them to get together and play music for one another while on vacation at a hotel located in the underbelly of the frozen U.P.

The staff at the Terrace Bay Inn doesn’t seem to mind the extra decibel levels in their banquet room for the weekend. Save for the ice-fishermen and the snow-mobilers, the Terrace doesn’t have much need in the winter months for flipping on the neon “no” sign out front. This wasn’t the case for Thundersnow weekend this year. Despite decent turnouts in previous years, 2015 was the first year the hotel sold out all of their rooms and nearly those of several other hotels nearby.

Senior German and graphic communication major Corey Sustarich, a first-timer at Thundersnow, said, remarking on the festival’s three-day duration, that he’d “never seen this much music for this long” in his “whole life.” He also said he’d “be back next year, always and forever.” He first heard of Thundersnow from graphic communication alumnus Nicholas Erickson.

Erickson said he heard about the festival before it happened for the first time in 2013. A friend of his, Jason Karby from Goddard, a band out of Worcester, Mass. with close ties to the Marquette music scene, was on the PRF message board and told him about the upcoming show. Erickson was able to get his band Witch’s Tit on the bill for Sunday that year.

“I kind of started contacting some of the people that were playing, and that’s how we ended up playing,” Erickson said.

This year featured performances from both the Terminal Orchestra and the Gray Beast, two bands in which Erickson performs.

“I always like to get a mix of bands that everyone knows and loves, and then always bring in new bands that have never played before,” Thundersnow coordinator Jeff Fox said. “We always try to have more than one band locally. [This year] we had two Marquette bands.”

Fox also said “the music itself is all over the place,” and that “people might jump to the conclusion that it’s all Shellac-sounding (Shellac is Steve Albini’s post-harcore band) stuff, but it’s not at all that.” From garage-punk like Gay Name, to slowcore indie-rock bands like Low, there was enough variety to keep everyone on their toes all weekend long.

As great as it was to see heavier bands like Split Pricks (Dubuque, Iowa) and Fake Limbs (Chicago), who I’m still blaming for my tinnitus weeks later, my personal favorite act of the weekend was Low (Duluth, Minn.). I’d seen them play for the first time back in 2008 at Keweenawesomefest in Houghton, Mich. when I was still in high school. Since then I’d listened to them a lot over the years; they were definitely the band I was most familiar with at Thundersnow.

The stage during Low’s set was almost completely dark, save for some blue and purple floor lights. Their music has a tendency to sometimes put me in a pretty dark place, so I was really glad my friends were all in the pool just in case I started making face-puddles on my viewfinder. Sure enough, I totally lost it during “Holy Ghost.” But I wasn’t the only dude who publicly shed tears that day.

The Terminal Orchestra is a 13-piece band comprised of musicians from all around the Marquette area. The project’s mastermind is Jesse DeCaire, who also plays in Säh and The Redettes. The sob-fest broke out around the time they played a deeply moving cover of “Out Of The Woods And Into The Light” by the Rutabega (South Bend, Ind.) to an audience of fans, friends and members of the Rutabega. Afterword, Josh Hensley of the Rutabega retired that song from their set, calling what the Terminal Orchestra played then the definitive version.

Fox’s goal for the festival is to keep bringing in more people from the area. The past few years they’ve done shows before the festival at NMU with First Aid Productions at the University Center.

This year, Nonagon performed along with The Rutabega and Chung Antique. Attendance has been growing each year.

All and all, it was a pretty incredible weekend. I didn’t see too many people ever having a bad time.

People sang along, some laughed, some cried, somebody even threw up in the pool.

Most surprising was the level of respect the out-of-town bands at the festival had for the U.P. locals and staff at the Terrace Bay Inn. I think it’s safe to say that I too will definitely be back next year.