The men’s basketball team was defeated in their 2014-15 season finale by the Michigan Tech Huskies 71-52 Thursday, Feb. 26 at Berry Events Center.

NMU head coach Bill Sall said the ’Cats were at a disadvantage healthwise on the depth chart.

“We played hard but we were certainly undermanned,” Sall said. “I didn’t think we had the bodies we needed to compete at the level we needed to.”

The Wildcats only had seven healthy players participating in their season finale.

Michigan Tech senior guard Ben Stelzer, who was named GLIAC Player of the Year this season, led the game in scoring with 20 points. 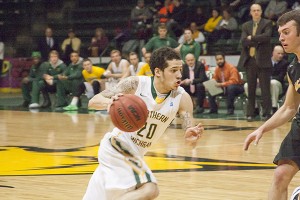 The Wildcats finished the season 9-10 overall and 7-15 in conference play, placing them last in the eight-team GLIAC North Division and 14th out of the 16 teams in the conference. The ’Cats dropped their final five games to end the season.

Sophomore guard Marcus Hall said he was happy with his team’s competitiveness in the final games of the year.

“We were down numbers by the end of the season,” Hall said. “We played hard but just didn’t have enough execution or enough of our team to pull out the win.”

Perez led the Wildcats in scoring this season, averaging 11.6 points per game with a season high of 23 points scored against Saginaw Valley State University Thursday, Feb. 12 at Berry Events Center.

The Wildcats will lose three seniors this offseason, including Mattison and guards Spencer Huss and Larry Taylor.

Hall said he has high expectations for himself as well as his teammates for next season.

“If we get stronger in the weight room it will help us keep up with the physical play in the GLIAC,” Hall said. “I know I want to be a big team leader for our team when we come back next year.”