The ‘suite’ life of NMU Board of Trustees

Board of Trustee member Scott Holman flies a private plane and stays in a suite at the Landmark when he comes to town for NMU Board of Trustee meetings, according to travel receipts obtained by The North Wind through a Freedom of Information Act request.

Holman, head of the board’s finance committee and a former chair, uses a plane through his private company, Bay Cast Aviation Services LLC, and is reimbursed for the price of a commercial flight; the rest of the bill he donates to NMU. 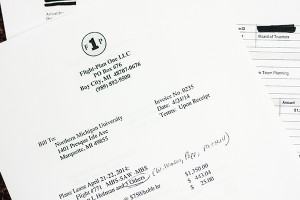 Holman donated $1,800, his entire plane cost, in late March 2014, which took him from the Cayman Islands to Detroit and back to the Caribbean. The donations do not go through the NMU Foundation, wrote NMU spokesman Derek Hall in an email.

When other trustees are on board, however, Holman is reimbursed in full for the private plane, which includes the pilot’s lodging and food. On April 16, Holman flew Trustees Steve Mitchell, Rick Popp, H. Sook Wilkinson and Thomas Zurbuchen to Willow Run airport in Ypsilanti, Mich. from Marquette to avoid an incoming snowstorm, according to the receipts. He was reimbursed $1,200 for that trip.

The majority of the other trustees fly coach out of Detroit Metro Airport or drive up from downstate. Plane tickets range from $800 to $1,200.

Trustee H. Sook Wilkinson, a clinical psychologist and author, spent $11,000 in travel in the last year. She submitted travel expenses for reimbursement every board meeting, while other trustees didn’t.

“As a Michigan resident since 1975, I feel strongly about giving back to the state of Michigan and the United States,” Wilkinson wrote in an email. “Prior to applying for the NMU board, I served on the board of many non-profits including an educational institution.”

The majority of the trustees stay in these rooms. However, Holman stays in a suite, according to the receipts, costing about $200 a night. Overall, Holman spent $1,600 more than if he had stayed in a standard room.

Also included in Holman’s hotel total is an extra room taken out in Holman’s name for $103, on April 16, which was “used for informal board discussions,” according to a handwritten note by Holman on the receipt. “Less than a quorum” was present, the note said.

“The trustees use a suite at the Landmark Inn as a quiet place to gather for team building and to meet with donors, alums and community members,” Chair of the Board Rick Popp wrote in an email. “It would be inappropriate to meet in someone’s regular hotel room and the suite is often a better location than a bar or a restaurant.

Trustee Holman’s suite is available to all trustees during our visits to Marquette as we fulfill our duties as volunteer board members.”

Board meetings that week took place July 17 and 18; however, according to Popp, the university paid for his hotel room the rest of the weekend so he could attend an alumni event.

The university covers travel expenses for the board, which includes transportation to and from the meeting, hotels and meals. Also included are “miscellaneous” expenses, which according to the Board of Trustees secretary, include meals during the meetings, A/V equipment and lodging for the legal counsel.

In the last year miscellaneous expenses totaled more than $33,821— about 45 percent of the total board expenditure last year.

In the last year the trustees spent $2,400 at The Northland Pub and Capers Restaurant, both located in the Landmark Inn. On one evening, Dec. 10, Steve Mitchell spent $155 at Capers.

The rest of the meals appear in single receipts from restaurants like The Vierling or in the miscellaneous column in the expense reports.

It is unclear how much was spent on food during meetings because, apart from the May 2 Board of Trustees meeting, there is no specific denotation on food. During the May 2 meeting, trustees were charged $6,600 for “conference and catering,” according to the expense records. The average miscellaneous cost of board meetings is $3,500.

The Board of Trustees is made up of eight governor-appointed members who serve eight year terms; the president of the university acts as an ex-officio member. According to the bylaws, the board “has general supervision of the institution and the control and direction of all expenditures from the institution’s funds.”