One of the best ways to build a better university for the students is to ensure that their voices are being heard, according to the newly-elected ASNMU President Lindsey Lieck. 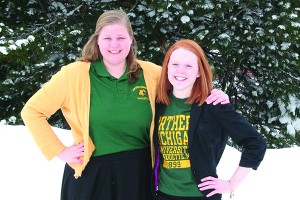 On Monday, March 25, ASNMU swore in nine of the newly-elected student government members for the 2015-16 school year.

Lieck, a junior political science major, said she became interested in government because it involves solving problems that help people.

“At NMU, we know that a lot of people here care about the environment, so collectively we want to find ways we can help improve our university’s impact on the environment,” Lieck said. “For the beginning of next term, our focus [as a student government] will be determined by what we hear from the students.”

ASNMU currently has plans for next year to create a biweekly newsletter they will email to students as a source of information on the happenings of the student government, Lieck said.

Liz Dow, a junior elementary education major, will be the new ASNMU vice president. Unlike the other members, this is Dow’s first time working in the student government office.

Dow said this new team will focus on strengthening relationships and trust with the administration for the betterment of the student body.

“To accomplish different things, it’s not about butting heads,” Dow said. “It’s about working together and building advantageous relationships for the overall good of the university. It’s our job to build a better connection between the student body and the administration.”

Dow has experience working with the Center for Student Enrichment and is currently a resident advisor in Magers Hall. According to Dow, the student government is responsible for getting out on campus and listening to students’ opinions regarding various issues.

“I think what I bring to the table is being well-connected with students. Everywhere I go, I feel like I know people and am constantly recognizing familiar faces, which is important,” Dow said. “This allows me to reach out to students and have conversations about what’s on their mind.”

Junior theatre major Alysa Spivak said the reason she voted in the ASNMU election is because she feels ASNMU are the ones capable of actually making things happen on campus and can do things to serve the students.

Lieck said these various conversations and data ASNMU representatives collect from students opinions are then formally taken to the administration.

“Say we go meet with the administration about an issue that students really care about and nothing happens after that meeting, it is our job to keep that conversation going,” Lieck said.

The way ASNMU approaches administration with an issue is by drafting and preparing formal resolution documents, according to Lieck.

“We come together as a group and decide what we feel as a group is the best option based off what we hear from the students, and then present our documents to the appropriate people to hopefully resolve the issue,” Lieck said.

Dow said her main goal is to make students feel like they are a part of the university.

Lieck and Dow earned 61 percent of the student vote in the general election this year, which totaled over 850 votes. Lieck beat incumbent Katerina Klawes by 181 votes and Dow beat Klawes’ running mate Jess Gula by 195 votes. Former president Katerina Klawes was officially disqualified from the election.