Mikenzie Frost, senior team president, said being intimidated facing Division I teams is a thing of the past for the team. 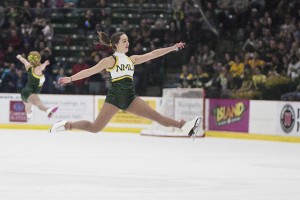 “Last year when we walked in and competed against teams like Michigan, Wisconsin or Ohio State, it was pretty intimidating,” Frost said. “I think the girls finally had a sense of pride [this year] and were all super confident this season compared to last. Coming from Northern, no one really knew who we were and that we even had a team. Last year kind of put us on the map, and this year we were really ready to go. People knew who we were and what we were about.”

The figure skating team competes in three competitions during their season, which runs from August to May.

All competitions for the team take place during second semester.

The first meet of the season took place at Adrian College Jan. 10-11 at  Arrington Ice Arena in Adrian, Mich.

The team then traveled to the University of Michigan Feb. 21-22 earning fifth place at the Yost Arena in Ann Arbor, Mich.

Frost took the only first place finish for NMU during the competition.

Frost earned first place in all three competitions she competed in this season for the Senior Free Long category.

Sophomore Jodi Wizauer and sophomore Alyssa Lambert will be leading the Wildcats figure skating team next year since both the president and vice president are graduating.

Lambert said she is excited to lead the team next year but knows she has big shoes to fill.

“It’s going to be hard to live up to them and what they have created,” Lambert said. “They have come far from the first time Frost decided she wanted to start the team.”

In the last competition of the season, the Wildcats took fifth place at the University of Wisconsin in Madison March 14-15 at CRSC ice arena.

Wizauer said getting snubbed from nationals gives motivation to the team for next season.

“It’s a heartbreaker,” Wizauer said. “We just want to do what we did this year and continue to move forward.

“The team has moved forward from two years ago before we were even on the team. We just have to keep working toward that ultimate goal.”