The Northern Michigan University football team is rolling into its second week of spring practice.

After coming off a disappointing 3-8 season, players are focused on taking steps to address the problems, then correct them heading into the 2015 season. 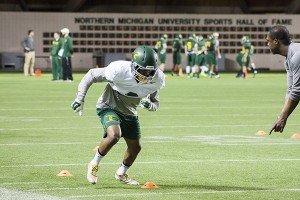 The ’Cats start each practice day with position meetings, which include film evaluation prior to a 6:30 a.m. practice.

Player growth and creating competition is the main focus.

“All the players have grown exponentially,” junior quarterback Shaye Brown said. “The young guys have done a good job learning all the plays and taking it to the field.”

The Wildcats finished 10th both offensively and defensively in the GLIAC in the 2014 season. With nine of the 11 starters returning defensively, and a two-year starter returning at quarterback, there are big plans for the ’Cats.

“Being more detailed and communicating is key,” senior safety Brandon Auguste said. “I feel we have better chemistry at this point in spring ball.”

The Wildcats will be returning eight of their 11 offensive starters in hopes of making the 2014 season finale, which was a 66-point performance, happen more regularly in the 2015 season.

“The starters all have great knowledge of the offense,” sophomore receiver Julian Crum said. “We have potential to be very good next season.”

Slight adjustments made to the offensive scheme focusing on adding explosiveness and size can be beneficial competing in the GLIAC.Brown said the team has to create competition throughout spring ball.

“We have to see who is going to contribute and make big impacts in the fall,” Brown said. “Personally, I have to play at a high level.”

Players take spring as an opportunity to get extra time to perfect assignments, but most of all to create a competitive atmosphere and earn their spot.

“As defense I want to dominate the offense every day,” Auguste said.

The Wildcats will conclude the spring season with an annual spring football game at 2 p.m. Saturday, April 18 in the Superior Dome.