A bright blue poster reading “Love Lydia” with a vintage headshot of a blue-eyed, short-haired red-head known as Lydia Olson can be seen everywhere on campus these days.

Lydia M. Olson was a student at NMU when it first opened in 1899 as the Northern State Normal School. She graduated valedictorian of the first two-year class. 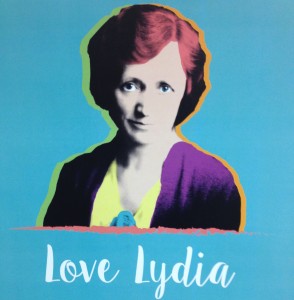 She served as secretary to NMU’s first principal, Dwight B. Waldo, and then served as librarian for 33 years. Olson even lifted the first shovel full of dirt at the excavation site of the new library that would be named after her in 1951. The original building was torn down in 1972, but the new library still bears her name.

The purpose of the “Love Lydia” posting is to inform students and faculty that their voice can be heard by completing a survey evaluating the library’s resources and environment.

The survey is being conducted through a survey organization called LibQUAL+.

According to LibQUAL’s online homepage, the survey intends to solicit, track, understand and act upon users’ opinions of service quality. The survey has been used by a number of college and university libraries to evaluate three elements of libraries: collections, library space and service.

Senior communication studies major Mike Marzinelli said he has seen the posters around campus but has not paid much attention to them. Better spatial organization of study space and electrical outlets, according to Marzinelli, is something the library can improve upon.

“I’d like it if there were more outlets for my computer,” Marzinelli said. “The library can also improve their organization. I feel some of the tables are randomly placed. The tables in between bookshelves seem a little tight.”

What makes the survey so valuable, said Molly Freier, head of public services and professor of academic information services, is that the data from the sample informs the staff about what is most important to the patrons. Freier said the library staff will study the data and then make the necessary actions and changes where they see fit.

Senior business marketing major Dustin Baker said the library staff has been great at helping him schedule study rooms for both personal and group study sessions. The study rooms are located on the third floor of the library and can be rented out to students with a student ID for a set time frame. Baker said another good place to study is in the carrels toward the back of the third floor.

“The carrels give you kind of a secluded feel,” Baker said. “They keep your mind focused and you can’t really get distracted. They give you a one-track mindset eliminating outside distractions.”

The staff is also interested in feedback from students who do not use the library on campus and also those that might only use the library’s online services, Freier said.

Senior sports science major Tim Martin said he does not have much interaction with the library staff.

“I don’t rent books,” Martin said. “That’s what the Internet is for.”

Freier said she encourages all students and faculty to take time to complete the online survey.

“What we want to do is act on the results,” Freier said. “That’s why we need a good sample.”

The survey will close Monday, April 20.