A pair of NMU track and field records were broken this past weekend when the ’Cats competed at the Hillsdale Invitational Saturday, April 11 in Hillsdale, Mich.

Senior Brittni Wirtz set an NMU record in the 100 meter dash with a time of 11.89, with junior Avadon James following in second place with an 11.99 time. 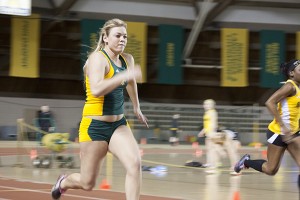 “Breaking the school record has been a goal of mine for a long time,” Wirtz said. “This was my best time since freshman year, so it felt really good to finally get the record and break my own personal record.”

Both Wirtz and James earned the ’Cats an NCAA provisional qualifying mark.

The second NMU record that was broken was by freshman Kameron Burmeister, who competed in the 5K finishing with a time of 17:41:89 and earning second place in the event.

“This whole year has been so amazing, and my team and I have accomplished things that I never thought were possible,” Burmeister said. “I feel blessed to be on this journey, and it feels surreal at times. This season has been going very well for myself as well as the team, and it’s an awesome feeling and an honor to hold the 5K record. Breaking the record was one of my big goals for the season, and I’m just happy I was able to accomplish that.”

Ryan said Burmeister has had a stunning freshman season.

“[Burmeister] is an impressive freshman that trains well and pays attention to all the details of becoming a top distance runner,” Ryan said. “It will be fun to see what she can do in the next few years.”

Other Wildcats who competed at the Hillsdale Invitational included sophomore Samanthia Johnson, who also earned a provisional qualifying mark in the discus throw, with a 47.05-meter throw placing second in the event.

In the 3K steeplechase, sophomore Shannon Flynn came in second place with an 11:45.07 time for the ’Cats.

Freshman Kate Thayer finished behind Flynn in third place with an 11:51.42 time.

The Wildcats will hit the road again this weekend as they travel to the Al Owens Classic at the campus of Grand Valley State University Friday, April 17-18 in Allendale, Mich.

“The meet at GVSU will be our last meet before conference,” Wirtz said. “I think everyone is looking forward to competing against good competition and improving our times and marks one last time. I think we are very excited as a team.”