A memory of fire: eulogy for Eduardo Galeano 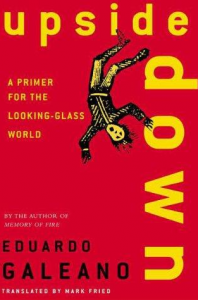 I have not read Grass’ work, so I cannot defend his writing, but I’d be remiss not to send a shoutout to my late homeboy Galeano, who wrote the highly acclaimed “Memory of Fire” trilogy and “The Open Veins of Latin America.” So, here’s a review of his 2000 book, “Upside Down: A Primer for the Looking Glass World.”

In “Upside Down,” Galeano lyrically examines the many contradictions that characterize the modern world. I believe he wrote it as a welcoming to the 21st century.

The era when, as Winona LaDuke would put it, defending wildlife is called eco-terrorism and poisoning waterways is called maximizing profits.

“The upside-down world rewards in reverse: it scorns honesty, punishes work, prizes lack of scruples and [it] feeds cannibalism,” Galeano wrote. “Its professors slander nature: injustice, they say, is a law of nature.”

Whether or not you accept his politics, or even if you’re completely disinterested in politics, his elegiac commentary is hard to ignore.

I have friends who refuse to pay mind to politics, but still want to marinate in his prose.

“Living wherever, living however, living whenever, each person contains many possible persons. Every day, the ruling system places our worst characteristics at center stage, condemning our best to languish behind the backdrop. The system of power is not in the least eternal. We may be badly made, but we’re not finished, and it’s the adventure of changing reality and changing ourselves that makes our blip in the history of the universe worthwhile.”

His effect leaves me mentally echoing his phrases constantly to dig deeper into their meanings.

“[In the looking glass world] the few children who manage to be children must have a lot of magic and a lot of luck.”

I ask all to examine and reexamine his words.

They will leave you questioning your core of reality, how you perceive your world and, most importantly, how you live       your life.