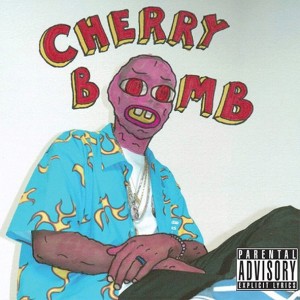 He is the leader of the collective Odd Future, a young team of musicians who aren’t afraid to push the envelope of what’s safe to say and what’s not.

In Tyler’s latest effort “Cherry Bomb,” you get a little more of the same but also a heavy dose of experimental efforts from an artist we haven’t heard from since his 2013 effort “Wolf.”

The album, which is produced entirely by Tyler, mixes N.E.R.D-influenced rock instrumentals with unexpected soulful hip-hop melodies. Tyler goes from controversial lyrics like “I’m going harder than coming out the closet to conservative Christian fathers” on the track “Deathcamp” to some of the most romantic lyrics I’ve heard in hip-hop lately: “You’re supposed to fly away, the way you stand there/ don’t let your wings go to waste,” on the smooth three minute track “Find Your Wings.”

Tyler bounces back and forth between these two completely different sounds throughout the album, but subtly compiles them together as one, creating a genuine sound that is unique to Tyler. Not many artists could be as versatile lyrically let alone produce this type of music all on their own.

By the sixth track, Tyler has exposed the listener to so many different sounds it’s completely a mystery as to what you’ll hear next.

He transforms back into his bizarre self for a brief moment on the album-titled song before sending the listener into an R & B influenced pool of melodies for the next two.

The album’s stand out song for devoted hip-hop listeners will undoubtedly be “Smuckers.” The song features hip-hop heavyweights Kanye West and Lil’ Wayne dropping verses reminiscent of both of their primes. West brings to the table his normal braggadocio rap style. “Nobody can tell me where I’m heading but I feel like Michael Jordan, Scottie Pippen at my wedding.” Lil’ Wayne provides a metaphorical style that makes you think and hungry at the same time. “I’m the master of ceremony — I knock them down domino effect, no pepperoni.”

The album also boasts features from California gangsta rapper Schoolboy Q, on the gritty track “The Brown Stains,” as well as a feature from Tyler’s well-known idol, Pharrell, on the track “Keep Da O’s.”

This holds some of Tyler’s best production of the entire album, switching from an intense hip-hop/EDM instrumental to a calming piano melody right in the middle and ending with a beautiful female voice closing out the song.

Tyler keeps up this calming spirit in the final song “Okaga, CA,” a soothing ballad about Tyler finding the girl of his dreams and flying away to the moon   with her.

The album overall holds an experimental sentiment not often seen in a hip-hop genre that sees a lot of the same, which is a testament to Tyler’s talent as a producer and artist.