With their NMU careers behind them, two women’s basketball starters are continuing their basketball careers professionally overseas.

Senior guards Alyssa Colla and Lauren Gruber have both signed one-season contracts with the Cairns Dolphins of the Queensland Basketball League located in Cairns, Australia. 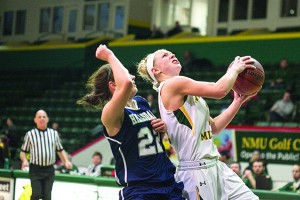 “I am most looking forward to the warm weather and just experiencing a different culture,” Gruber said. “Any skeptic feelings I had about playing overseas were resolved when the coach offered both Alyssa and I [contracts] at the same time. It’s extraordinary that we get to continue our careers together on the same team.

Having her by my side will help to appease feelings of anxiety and will allow me to adjust to my new environment faster.”

The QBL consists of 16 teams throughout the Queensland region, with teams as far as 18 hours away, requiring transportation by flight and bus. The Dolphins play one game per weekend and the regular season runs through August, with playoffs reaching the end of the month.

“I have never been out of the country, so I am extremely excited,” Colla said. “I have only heard great things about Australia, so I’m looking forward to the experience. Some things will definitely be different, like driving on the left side of the road. That will for sure take some practice. I am mainly just looking forward to the overall experience and learning about the different culture.”

The season begins for the Dolphins on Saturday, May 2, but Colla and Gruber have elected to miss the season opener for their graduation.

Both Colla and Gruber will graduate with public relations degrees.

In their four seasons at NMU, the two made their marks on the Wildcat basketball program becoming some of the leading scorers in team history. Colla, a Muskego, Wis. native, earned 1,567 career points at NMU, ranking third all-time.

“I am so incredibly proud to have coached such talented and smart players,” Dunham said. “The duo is unlike anything I’ve ever seen. If one is having an off game, the other picks her up and vice versa. It’s like they were made to be a part of this program.

“Their toughness, attitude and heart is what I admire most. They truly represent the culture of what we want at NMU and will forever mold our future Wildcats to their success.”

Gruber was named MVP of the 2014 GLIAC tournament.

“I think that participating in college basketball has shaped me into the driven and ambitious person I am to date,” Gruber said. “It brought out my innate competitiveness and helped me to embrace that characteristic.”

After finishing their season in Australia, Gruber plans on attending the University of Wisconsin to pursue a master’s degree in educational leadership and policy analysis. Colla plans to return to the states to begin her basketball coaching career.

“The NMU basketball program has helped me reach this achievement by developing and improving as a player over the last four years,” Colla said. “I also think the leadership skills I have learned and developed here have helped shape me into the player I am today. I am incredibly thankful to have had the opportunity to play here and for the career I have had. I take a lot of pride in this university and will always consider myself a Wildcat.”