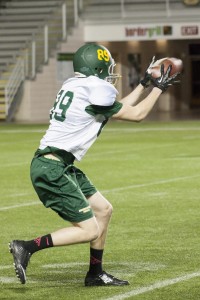 “I thought this was a great spring on many levels,” Ostrowsky said. “We are off to a great start. Many players stood out but [freshman quarterback Jordan Jones and freshman linebacker Darryl Williams] really had great springs.”

Freshman running back Jordan Jones said he had a very productive spring game.

“I did everything my coaches taught me and I just had fun,” Jones said. “Thanks to the offensive line, I had a little extra running room to make those plays.”

Williams also made a number of plays throughout the spring game. After missing two games due to pre-patellar bursitis in his knee, he is expected to recover before the 2015 season.

“I feel I made some major plays but I’m young and still learning from my coaches and [senior linebacker] Levi Perry, who is one of the guys I look up to at my position,” Williams said

Offensively, there were four touchdowns scored, three passing and one rushing touchdown.

Defensively, there were a number of three-and-outs, along with an interception by junior cornerback Laquan Middleton.

“I want to help my team get to the playoffs,” Williams said. “We have to get our seniors a championship ring.”

The team has a new emphasis headed into the 2015 season to finish mentally.

The spring improvements, along with the recruiting class have the ’Cats very confident headed into the 2015 season with high expectations.

“My goal for next season is to make a run for the national championship,” Jones. “I want some bling on my finger.”