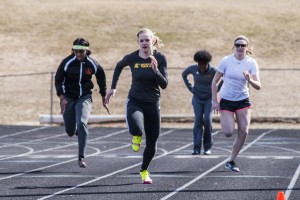 The Wildcat track and field team wrapped up their 2014-15 season with a pair of placements at the NCAA Championships.

Sophomores Samanthia Johnson and Jasmine Williams both partook in the discus throws, with Johnson earning All-American honors for her performance.

Johnson began with a throw of 46.68 meters to start in fourth place, but her next three throws placed her in ninth place.

Her final toss of the championships was good for 48.51 meters, setting an NMU record and placing eighth place.

Williams started the event in first place after her first throw, which was good enough for 41.81 meters.

Her following throws reached 40.89 meters and 39.17 meters to finish in 17th place by the end of the event.

“The season went really well for myself and the team,” Johnson said. “We had a lot of personal records and school records throughout the season. It was my first nationals, and although I would’ve wanted to attain a higher placement, I’m grateful that I was able to be an All-American. It was a wonderful experience, and I look forward to finishing higher next season.”

The NCAA Championships were the final competition for the track and field team’s 2014-15 season.

The Wildcats finished the season in ninth place in the GLIAC out of 16 teams.

Throughout the team’s 21 competitions, the ’Cat’s highest finished placement was second place at the GVSU Owens Classic on Friday, April 17 in Allendale, Mich.

“Overall we had a great season with a small and fairly young group of student athletes,” Ryan said. “We broke many school records, had many personal records and finished respectably in the GLIAC.”

The season was the first for Ryan with the team, who was named head coach of the track and field team this past offseason. Ryan has also served as the cross country head coach for eight seasons.

The Wildcats will be losing four seniors this offseason, including Emily Allen, Larissa Halonen, Jasmine King and Brittni Wirtz.

“Our four senior students have gone through many transitions and changes while they were here, but they were still very successful throughout their careers,” Ryan said. “They have helped build a new foundation to this team that will be successful in the coming years. They were all top level students and quality people. They have meant a lot to this program, and we will definitely miss all of them.”