’Cats aim to ‘finish the job’ this season

NMU football head coach Chris Ostrowsky sat at a podium along with his captains with smiles and optimistic thoughts passed around on the afternoon of Sunday, August 23, at the team’s media day.

Throughout the day, there was one message that was shared amongst the coaches and players.

The Wildcats are coming off a season that saw seven leads blown late in games to finish the season with a 3-8 record, landing the ’Cats 13th out of 15 teams in the GLIAC. 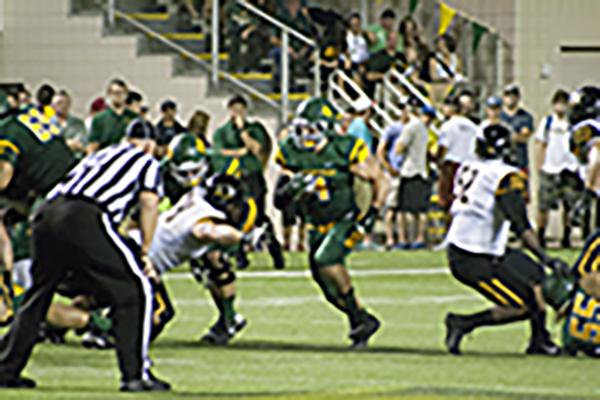 “It’s our senior season, and we’re trying to finish strong,” Tucker said. “In every sense of the word and in every essence of this program, we’re trying to finish this thing. We’ve been strong for four years with [Ostrowsky], and we really want to finish. Last year we came up short in games, and now this is the year and the time to go out, win and finish.”

Tucker was named one of the team’s four senior captains, which also include running back Wyatt Jurasin, center Kyle Steuck and linebacker Levi Perry.

The ’Cats have suffered injuries to key players during Ostrowsky’s tenure as head coach, including losing Perry last season due to a sprained ankle.

Jurasin said there has been a change in physical approach this past offseason.

“It all started with our conditioning,” Jurasin said. “We have great coaches who kicked our butts all summer. We’re bigger, faster and stronger than we’ve ever been, and a lot of last year’s losses were because we weren’t in the shape we should have been in. Now that we’ve gotten where we need to be physically, we’re going to have it in us to finish so we don’t come up a few points short at the end.”

During the 2013 season, a pair of injuries to the ’Cats’ starting quarterbacks put redshirt freshman Shaye Brown in the starting role. Brown went through his first full season as the team’s starting quarterback last year, and ended the season against Findlay with a Wildcat record setting performance, throwing for 490 yards. Brown also ranked second in the conference with 261.0 passing yards per game and 13.88 yards per completion on the season.

“[Brown] has had a great summer,” Ostrowsky said. “He had a really successful spring and has carried us through camp. He’s fluent in this offense now, and he speaks our language. When we threw him in his first year, he was a true freshman. He came in after two injuries to our quarterbacks, and the kid you see today compared to his first game is not even close.

“His maturity is off the charts compared to when he arrived, his talent level is better, he can understand the game more and we’re excited to see him play. We need him to have a good year.”

Brown said he knows the corrections he needs to make to his game.

“I’ve been concentrating most on my throwing motion this summer,” Brown said. “I’ve really been working on not dropping my elbow as much, and I’ve been watching a ton of film and gaining more knowledge. I think we as a whole need to work on the little mistakes on offense, and we’ll for sure be on a competitive level.”

The Wildcats open their season at 1 p.m. Saturday, Sept. 4 at Northwood University in Midland, Mich.