On the morning of Wednesday, Aug. 26, two reporters from the Roanoke, Virginia ABC affiliate WDBJ arrived at a local strip mall to conduct an interview with a local businesswoman, a story so pedestrian that most journalists wouldn’t think twice about going out on the assignment. 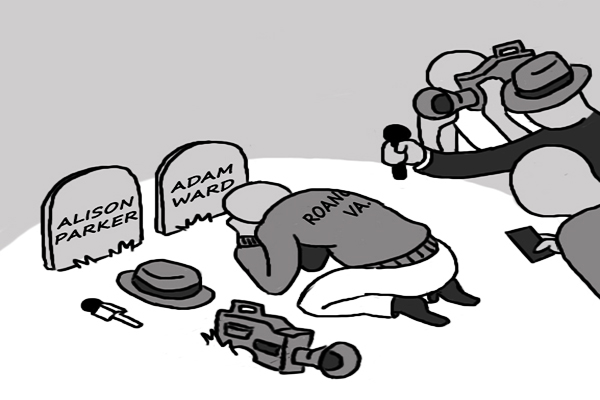 Ever since the days of the Crimean War, journalists have entertained a bizarre love affair with dangerous situations in order to give the world the news. In combat zones, the danger is assumed and journalists have to decide whether or not to take a risk to get the story out.

In the sunny suburbs of Roanoke, that narrative was ultimately challenged as a disgruntled former WDBJ reporter, 41-year-old Vester Lee Flanagan calmly walked up to a live interview and opened fire, executing 24-year-old  reporter Alison Parker and 27-year-old cameraman Adam Ward while thousands of horrified viewers watched from their living room.

By early afternoon, a second video had surfaced which was filmed by the shooter himself and posted to Twitter, showing in great detail how Flanagan stalked the two reporters, and ultimately opened fire on both of them.

In the interest of understanding, The North Wind staff viewed the video, which has been shared by a few national media outlets. As much as we regretted it, we had just witnessed the death of two individuals—not in a Hollywood movie—but on the front page of a national publication.

We believe that airing the video was not only unnecessary, it also sets a dangerous precedent for the perpetrators of future acts of violence. Not only can they expect their names to be immortalized in print, but now their own video-taped point of view can make headlines as well.

How did society get here, we wonder? Is it not enough to get “all the gory details” in print, or have we progressed to the point where viewers aren’t driven to read about a shooting unless they can experience it from the eyes of everyone involved in what amounts to a snuff film?

Immediately, we think about the families of Parker and Ward, who will have to spend the rest of their lives knowing that the murder of their loved ones is available for all to see. Was it worth inducing pain and suffering for two families who will never be the same? The North Wind thinks not.