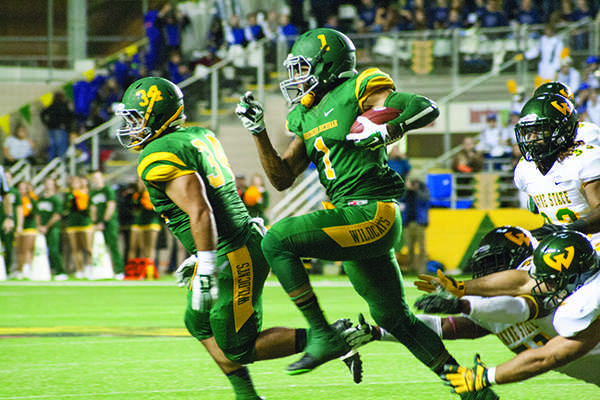 It was home sweet home for the Wildcats at the Dome Saturday afternoon, as NMU defeated the Quincy Hawks 31-14 in their home opener to earn their first win of the 2015 season.

NMU senior wide receiver Marcus Tucker led all offensive players in the game with 205 yards with three touchdowns in the win. Junior quarterback Shaye Brown was 23 for 26 in passing, with 353 passing yards and three touchdowns.

Brown and Tucker have put up four touchdowns in the ’Cats’ first two games this season.

“It’s nice throwing to Tucker,” Brown said. “He’s one of the league’s best, and possibly the country’s best. We try to get him the ball as much as we can, and he did a great job making plays. He’s a true leader.”

The offensive achievements were overshadowed with an injury to senior running back and team captain Wyatt Jurasin, who was carted off the field and left the stadium near the end of the second half.

“I don’t know the extent of his injury, but I know it wasn’t just a sprain,” Brown said. “It’s a big loss, but he’ll be there everyday continuing to lead us, and I know he’ll try to get back as soon as he can.”

Jurasin had 52 rushing yards on 10 attempts before leaving the game. Sophomore running back Aaron Harris replaced Jurasin, racking up 82 yards on 18 attempts with one touchdown.

NMU started the game marching 77 yards for a 31-yard touchdown pass from Brown to Tucker to put the ’Cats on top 7-0.

Five plays later, Quincy punted the ball back to NMU’s senior returner Austin Young, who brought the ball back 43 yards to the Quincy 35-yard line. The Wildcats would get the ball 20 yards closer setting up for a field goal from sophomore kicker Ryan LaBerge to extend NMU’s lead to 10-0.

Quincy was once again unable to get the ball past midfield, forcing them to punt the ball back to the ’Cats this time to their own 16-yard line with 1:55 remaining in the first quarter. Brown once again marched NMU to the Hawks’ territory, finding Tucker for another touchdown, this one of 15-yards to give the Wildcats a 17-0 lead.

The Hawks would threaten the Wildcat lead in the second half, as Quincy senior quarterback Nick Lonergan rushed 16 yards for a touchdown on the first drive of the second half to cut NMU’s lead down to 10 points.

On the next drive, the ’Cats marched 70 yards on 10 plays to the Hawks’ end zone, but Brown was ruled to have fumbled the ball at Quincy’s goal line for a touchback, giving Quincy the ball at their own 20 yard line.

The Hawks took advantage of the turnover on the next play, with Lonergan throwing a 50-yard bomb to junior wide receiver De-Carols Poole to the NMU 15-yard line. Sophomore running back Chris Harris would pass those 15 yards on two straight rushes to find the endzone for the Hawks and make it a one-score game at 17-14.

NMU would respond with a 68-yard touchdown pass from Brown to Tucker once again on the next drive to put the ’Cats back on top by 10 points.

The Wildcats would seal the win on the next drive, as Quincy marched 65 yards over five minutes but Harris would fumble the ball for Quincy at NMU’s 10-yard line to give the ’Cats possession and the win.

NMU head coach Chris Ostrowsky said the drive was defining for how the program has developed during his tenure.

“When we look at our body of work the last two years, we’ve been in adverse situations where we weren’t able to pull ourselves together and finish, but we did that today,” Ostrowsky said. “Adversity clearly hit. We played a good offensive football team, and we came up with a big stop on a monster drive. I don’t know if we’ve ever had a drive that was so run oriented and time-possession oriented, but we believed we could finish and win.”

The Wildcats advanced to 1-1 on the season, with the Hillsdale-College Chargers coming to the Dome next weekend for homecoming week.

Kickoff between the Wildcats and Chargers is scheduled for 4 p.m. on Saturday, Sept. 19.