In a 6-1 vote at the Marquette City Commission meeting Monday evening, Duke LifePoint was approved to begin planning construction for a new Marquette General Hospital. 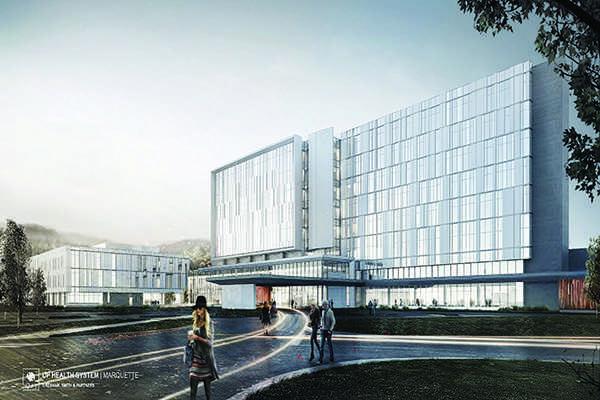 The hospital will move from 580 W. College Ave. near NMU’s campus to 850 W. Baraga Ave. in South Marquette. Some of the hospital’s exclusive features will be a hospital tower standing 110 feet in length (600 ft. in width), a 3-story garage, and roughly a 40-foot billboard that will rise 30-feet above the U.S. 41 highway.

“Until it’s up, people can’t quite fathom how big that sign will be,” said Commissioner Sara Cambenesy, who opposes the new hospital, citing negative environmental impacts with energy-efficiency and wildlife safety as her core causes of concern.

“I think this project is still out of order,” Cambenesy said after the unanimous decision to move forward with development.

Other features of the new hospital include a tech-advanced building, cutting-edge equipment for better medical care and a drive-thru with a heated garage for EMS accessibility during the winter. The new hospital will primarily consist of a tower, a parking garage and a medical clinic. The hospital tower will be its predominant feature.

Duke LifePoint UP Health System Commission will utilize Planned Unit Development Zoning. Contingency plans have been made for expected growth patterns of the new facility. Its expansion capabilities are expected to be nearly boundless.

The UP Health System will have to adhere to three variances proposed by the city before everything is set in stone. The variances include:

• 20 feet candle light fixtures for the parking lot. (Lights will be downcast instead of globe- topped to keep light pollution minimal).

Because the hospital will be moving farther away from the college campus and many students will have to find other means of transportation if they can’t walk, U.P Health System has been consulting with public transportation for ease of access to way-finders. The hospital will have an extension to the Iron Ore Heritage Trail so that pedestrian connectivity will be more feasible. Duke Lifepoint will add some seating and other amenities to the trail in order to make travel and waiting more comfortable to people and patients.

The project is estimated to cost roughly $300 million. The building will be made up of 35 percent glass which is in compliance with the city’s ordinance. There will be less glass on the northern side and more glass on the south side of the building in order to maximize sunlight in the winter and reduce solar infraction in the summer.

The commission had concerns architecture and the expected color of the building, the height of the sign and light pollution.

“We’re trying to project the future for Upper Peninsula healthcare,” said Jim Bogan, market president of UP Health System. “We want to be the place where people can seek all the care that they need when they need it.”

Currently, no plans have been made for the empty hospital and the parking lot that will be left behind on College Ave. Discussions for what to do with the building are not expected to begin until August 2016.