The new president will be so fetch. So fetch.

It’s the first presidential election you’ve tried to pay attention to. This can be a stressful time, but don’t hide in the bathroom. With all of the candidates for president, it feels like the competition for the most popular girl in high school all over again. Don’t worry; we have your cafeteria guide to election 2016, “Mean Girls” style. 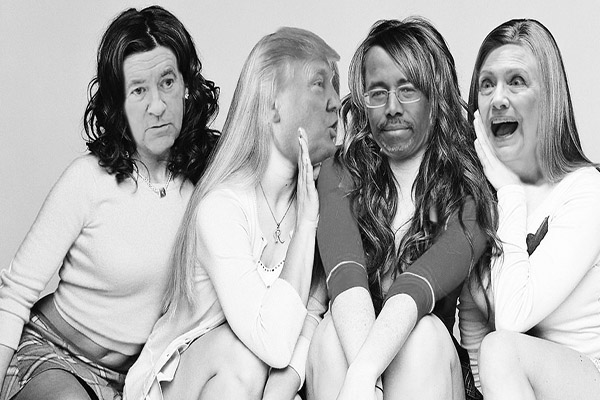 Sitting at the Democrat table are the coolest people you’ll ever meet. Hillary Clinton isn’t sorry for being who she is and wants to keep the rumors about her email scandal on the down low. What she doesn’t realize is that she’s coming across as untrustworthy with all her secrets. However, Clinton is confident in who she is and her beliefs. College kids, she’s got a big, debt-free tuition plan for you! Suck on that!

Bernie Sanders supports equal rights for gay people, women and racial justice. He’s almost too open-minded to function. Sanders won’t let anything bring him down. He supports the Iran Deal, free college tuition and getting big money out of politics. Wow, Bernie, you’ve almost out-liberaled yourself this time.

At the Republican table are the Plastics. Mike Huckabee is one of the dumbest candidates you will see in this race. He actually has some good ideas for taxes and education but people forget about him because he’s so ignorant. It’s almost like Huckabee has a fifth sense for the law; he knows that you have your state court cases, then your Constitutional Amendments, and then your Supreme Court cases. Someone should tell Mike that’s not the hierarchy, Dred Scott is not the law of the land today and Kim Davis wasn’t jailed for being Christian.

Next is Jeb Bush, whose father (and brother) were both president, which is so fetch. Do you want to know why his forehead is so big? It’s because it’s full of secrets. Or maybe that’s where he keeps his stances on issues (because they’re not listed on his campaign website). Don’t mention that he isn’t completely against tax increases. His father (former president) probably doesn’t want to hear about it.

We can’t forget their leader. How do I even begin to explain Donald Trump? His favorite political stance is anti-immigration (which happens to be the only issue listed on his campaign site). According to Forbes.com, he’s worth up to $4 billion. Trump is living proof that the more people hate you, the more publicity you get. The weird thing about him is that Americans can hate him and at the same time want him to keep showing up in the news.

And we can’t forget the newcomer on the scene, Dr. Ben Carson. This is the former neurosurgeon’s first political campaign. How far up can Carson rise from where he started? The limit does not exist. Born into poverty, Carson was a troubled youth who would go on to specialize in separating conjoined twins.

Half his supporters like him because he’s not Trump and the other half admire his Presidential Medal of Freedom and 67 honorary doctorate degrees. Have all of his awards been polished? Would he like us to assign someone to polish his awards?

This guide will be the key to your survival in the 2016 race for president. Who will be voted spring fling queen—I mean, president? There can only be one winner for this. We can’t tear up the Oval Office and give a piece to everybody.