Aging buildings get facelifts across campus

With three Gries Hall classrooms out of commission due to an ongoing relocation project for the Beaumier Heritage Center, two new classrooms are being built in the old Starbucks lounge area. 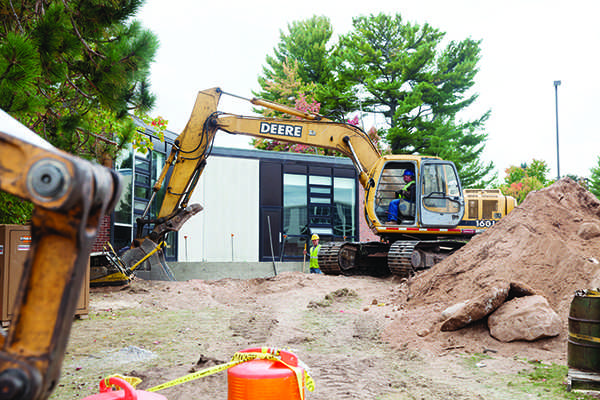 The buildout of classrooms stems from the initial planning of new Jamrich. According to  Director of Engineering and Planning/Grounds James Thams, when Jamrich planning began, old Jamrich was to be demolished and Gries Hall was either going to be repurposed or demolished.  The Beaumier relocation from Cohodas to Gries Hall to a simple refurbishment but three classrooms came off line, starting in the fall semester of 2015. These classrooms needed to be replaced and the idea was to rebuild the loss in the Learning Resources Center (LRC), Thams said.

Infilling some of the second floor of the LRC was the first idea, but after the opening of new Jamrich dropped traffic through the lounge area by the old Starbucks, it created a great opportunity to use the available space, Thams said. Half the lounge will remain untouched outside the new classrooms. Adjacent to the new classrooms are two pre-existing classrooms, 108 and 109. Thams said hopes to increase student traffic through the area are high.  All LRC construction is on one contract and being overseen by Cross Construction due to the close proximity of the areas and similar time restraints. All together, all LRC construction will cost $229,000. The construction is projected to be finished on Oct. 31. The Audio Visual Department will move in all the equipment so that the rooms will be in use for the winter 2016 semester.

The Learning Resources Center (LRC) saw a loss in student foot traffic after the relocation of Starbucks from the bottom floor of the LRC to the new Jamrich building so Dining Services decided to take the opportunity to increase its footprint in the area by taking over a former archive space and turning it into a hybrid convenient market called Sundre.

The micro-mart will not only sell essential non-food items such as phone chargers and school supplies, but healthy, grab-and- go options for students that don’t have time to wait in long lines for other dining facilities.

Associate Director of Dining Services Paul Schoonveld described the concept as a “premiere grab-and-go line” that sells salads, sandwiches and various snack options but will have a different look and feel than the current grab-and-go options in other dining locations.

“What we’ve heard from students, faculty and staff is there isn’t really that convenience, quick stop for food in the center of campus,” Schoonveld said. “The idea comes from them feeding us the information and explaining that they want the convenient stop-and-shop. We took it one step further to have products with better and cleaner labels.”

Student concerns voiced by ASNMU and the Food Advisory Board sparked the Dining Services planning team along with Schoonveld and the Director of Dining Services Sharon Carey to come up with the idea with a focus on food  that have less preservatives and more man-made ingredients. A “Let’s Chat” session in March that featured displays of the potential product line introduced students to the new idea and was seemingly well received by students, according to Carey.

The project is solely funded by Dining Services, which is categorized as campus auxiliary services.

The department does not receive funding through the university so the revenue brought in by retail operations, the Marketplace and the Wildcat Den covers costs for renovations, development and expansions within the department.

“The best way to think of it is that Dining Services is a business on campus,” Carey said. “We don’t get any state appropriations or money from the university for development of dining venues on campus.”

Renovations are tentatively set for the end of October. Sundre is set to open at the beginning of the 2016 winter semester. Dining Services intends on having an open dialogue through the Food Advisory Board and sessions of “Let’s Chat” so students can have a voice in the products they bring in.