On a chilly October afternoon, Dan Bell and Hannah Hawkins stood on the infield of the Marquette Senior High School track. Most of the team had participated in a “practice” meet the day before, so they had an easy workout—running an hour before going to the track for some medium-pace laps. Bell and Hawkins shouted encouragement and lap times as those who did not race (Ben Macioszek, Jake Winkler and Alex Carleton) ran 400-meter intervals around the track with brief rests in between. 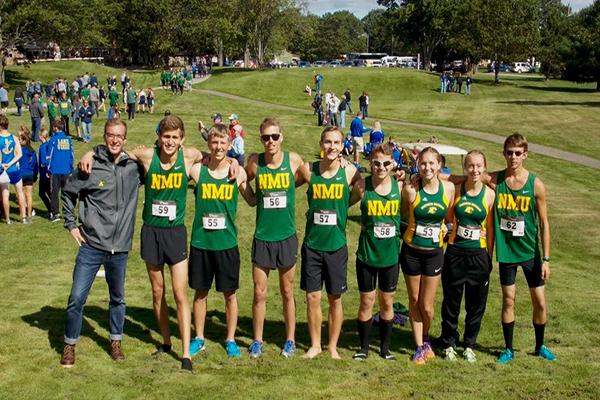 “With this interval training their bodies don’t get set into a tempo, so when they go into race day it feels easier even though in a race they’ll be doing this pace for five miles straight,” Bell explained.

When Bell, a senior entrepreneurship major, transferred to NMU, he was disappointed to find there was no men’s cross country team. After running competitively at Lake Superior State University for two years, not being able to join a cross country team at NMU was a blow.

It was after helping to coach the club track team last year that Bell became interested in getting a club cross country team up and going.

“I knew that I wanted to be involved in running until the day I couldn’t, and then I realized that I liked coaching better than running,” Bell said.

Scott Drum, professor of exercise science, acts as a mentor for the team. Due to a knee injury he isn’t able to be as involved in the running as he would like, but he tries to make it to practices at least once a week.

“I consult as needed but Dan is really the lifeblood of the team,” Drum said. “It is a great endeavor and within a few years I think it will be at the varsity level.”

Sophomore physical therapy major Hannah Hawkins and sophomore biology student Ben Macioszek help Bell run the team as co-captains and club vice-presidents. An important role for Hawkins and Macioszek is to convey to Bell how their teammates are feeling.

“A lot of the time the runners feel more comfortable talking to their teammates rather than the coach,” Hawkins said. “I can then approach Dan with any concerns they have.”

Though Bell does plan practices in advance, he puts a lot of weight on how each individual runner is feeling on a particular day.

“They know their legs better than I ever will. I really believe in being flexible with training,” Bell said. “It’s a safer way to do it, and while the lower risk means smaller short-term rewards and gains, there is definitely improvement at the end of the day. We’re still training and getting faster.”

Since the inception of the club this summer it has grown to 12 members. While most of the athletes have been running for years, they have a variety of reasons for joining the team. Some joined to get fit; others, like Sam Parlette, hope to get results and then be recruited by a university where they can run on a scholarship.

After unhappily running for multiple seasons at Siena Heights University, Parlette left the school and decided to run on his own schedule. He then began training under Bell in September, and though he is not an NMU student, he competes with the rest of the team as an unattached runner at cross country meets.

As a new club, the team does face its share of challenges. Budgets are being cut around campus and there is little left over for a new club sport. The team relies on friends and connections throughout the collegiate running world to make travelling to meets possible—it’s involved sleeping on friends’ living room floors and pulling strings to get breaks on race entry fees, but they’ve been able to make things work so far. Though all the club members pay yearly dues, money is tight, and Bell thanks his entrepreneurship background for making the team operate smoothly.

Bell has hopes that this club will spawn a men’s varsity cross-country team within the next few years.

The female club team would be a farm team for the current women’s cross-country team. This means that when the varsity squad is looking to recruit, it would look to the club team for runners.

At the recent LSSU Chris Yanni Memorial Invitational, the club team raced against Division II varsity teams, with two of their runners placing in the top 25.

The team will have two meets over the next two weekends at Northwood University and Muskegon Community College. Bell and his team hope to place well in these upcoming races and cash in on the long season of hard work.