The annual battle for the Cappo Cup begins this weekend between the Wildcats and the Lake Superior State University Lakers in a home-and-home series to open play in each team’s barn.

Sophomore forward Robbie Payne said the ’Cats look forward to their matchup with LSSU each season. 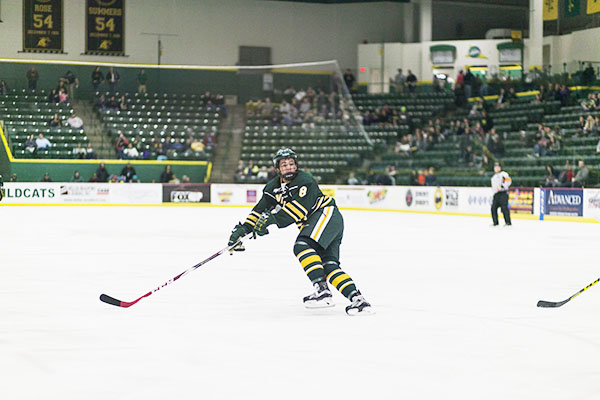 “It’s definitely a great rivalry with [LSSU] and having the cup on the line.

The two teams are both members of the WCHA, but the weekend series will not count toward conference play. It will however count toward the Cappo Cup, the trophy that’s yearly awarded to the winner of the U.P. series that is named after the late local priest Father Cappo, a man who was admired by NMU head coach Walt Kyle.

“Father Cappo was a great friend of mine. He was a great man who was a big supporter of the hockey programs at both universities,” Kyle said. “I think it’s a real fitting cup. For us to have something for us to play for is awesome, and we certainly want to keep it here in Marquette.”

The ’Cats captured the cup last season for the second straight year, winning the series 3-1 over the Lakers and outscoring them 12-6 in the four games. NMU took both games in Sault Ste. Marie last October, then split a late season series at the Berry in February.

The status on starting junior

goaltender Mathias Dahlstrom is still unknown heading into the series, after Dahlstrom was replaced last weekend at the University of Wisconsin Badgers by freshman Atte Tolvanen.

“[Dahlstrom] is cleared to play, but he has to get his timing and get all those things back in order,” Kyle said. “He worked hard at it a week ago but it was only one week in, and now he’s a week better. In my opinion he should be better to go, and we’ll see as the week progresses.”

Tolvanen stopped 61 of the 77 shots he faced in Madison as the ’Cats skated to a pair of ties that both resulted in shootout wins. NMU let third period leads slip away in both contests, giving up the tying goal with 42 seconds remaining on Friday’s game and losing a 3-0 third period lead on Saturday.

Tolvanen said the Wisconsin series was a good start to the season.

“It was a fun experience,” Tolvanen said. “Wisconsin had good fans, and it was fun playing in a loud building. Our team got off to a late start, which was good for me and made me comfortable after that. We played pretty well offensively overall with a few turnovers we need to fix. Once we address that, we’ll be good.”

Two members of NMU’s freshman class stood up in the shootout to become overtime heros for the ’Cats when forwards Filip Starzynski and Troy Loggins each converted goals in Friday’s shootout. Sophomore forward Zach Diamantoni scored the lone goal in Saturday’s shootout to give the ’Cats the moral victory.

The Lakers competed across the country last weekend in the Ice Breaker Tournament in Portland, Maine where they fell to the University of North Dakota and Michigan State Spartans.

Sophomore goalie Gordon Dofile is in his second season starting for the Lakers. Senior forward Austin McKay was LSSU’s leader in scoring with five goals.

Kyle said he expects their rival to be a bigger challenge than last season.

“I know they’re a much improved team,” Kyle said. “Last year was the first one their staff had, and they’ve brought in a bunch of new faces. They’ve done a real good job, and we know it will be a tough challenge.

“Last season we played them at home with home playoffs on the line and they beat us, so we know they’re a difficult opponent. Then we’ll go to their building in a tough environment, and we’ll find out what we’re made of this weekend.”