Winter surfing a blast—if you can stand it

Surfing in the chilly, fresh waters of the Great Lakes might seem out of place and more appropriate for California or Hawaii, but a dedicated group of surfers in Marquette are growing accustomed to the seemingly ever-cold waters of Lake Superior. 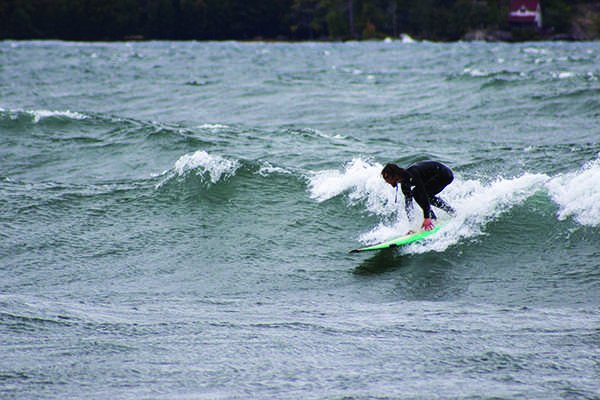 With the help of neoprene, thermal wetsuits rated for waters hovering around freezing temperatures, surfers are able to stay in-season as long as there is surf and the waves aren’t frozen solid.

Several people have been out these past few fall and winter seasons and are planning to be out this year until the lake freezes over.

“You know you’re having fun when the wind’s blowing at 40 miles per hour, it’s snowing, sleeting or raining, you can barely see, and your jaw is too numb to talk,” construction management major Alex Dykstra said. Dykstra said that as a surfer in Marquette, you have to get used to surfing in inclement weather because the biggest, best waves show up when there’s a storm blowing in or there’s a quick change of temperature, generally when the season is changing from fall to winter.

The most popular location to surf in Marquette is a place that local surfers call “the zoo”. It’s the bay on the west side of Presque Isle and is the closest place to downtown Marquette to catch some great waves.

“The main difference between the oceans and Lake Superior is that we don’t take waves for granted here. When there’s surf, everyone drops everything to go while the getting’s good. In California it’s just another day on the beach.

“Another thing that is great is that once you’ve been surfing, you are a part of the unspoken surf club of Marquette. There’s a really cool sense of comradery and community, something that you can bond over. You get a sense of team.”

Surfing is a sport that is growing in popularity along the coast of Lake Michigan and Superior and that can be seen in the amount of surf boards sold at Wet Mitten of Grand Haven.

The wetsuit, gloves, and boots that are normally needed for winter surfing can get expensive, and with Lake Superior only having intermittent surf, it helps to be able to test it out and see if surfing is for you.

“It’s definitely not for everyone. Knowing people to borrow things from is definitely a plus,” said Jacob Bass, elementary education student at NMU.

“I started by borrowing gear and boards, then later bought my own wetsuit to go more frequently,” said Bass.

“Once you get your first wave, you’re hooked. What keeps me coming back is the experience of standing on top of water,” Bass said.

With all of the fun and excitement of winter surfing however, there comes a need for a lot of safety precautions to be heeded by beginners and experts alike, said Bass.

According to an article by Lola Jones on extremesportforu.com, certain elements are important to stay in tune with.

“The wind chill factor is probably the most dangerous element you have to face, so keep out of the wind if possible. Sit in your car when watching the surf or find some shelter from the wind and, until you get into the water, wear as many warm clothes as possible, and definitely keep your head covered,” said Jones.

Jones said that the next most important thing is to eat high fat foods to give you slow release of energy to sustain you.

“Start small, stay within your comfort zone, don’t be stupid, and always surf with a buddy; someone who knows what they’re doing. It’s definitely not something to joke around about,” said Bass.

As long as the right cautions are taken, and the right gear is worn, almost all year round surfing in Marquette can be a fun, adrenaline-spiking sport that can satisfy the cravings of the adventure seekers.