Nearly 15.3 million children in America lived in food-insecure households in 2014, according to Feeding America, and subsidized school lunches only help on school days. Thanks to one of NMU’s newest student organizations, nearly 60 K-12 students in the Marquette area no longer have to worry about getting enough to eat on days when class is out. 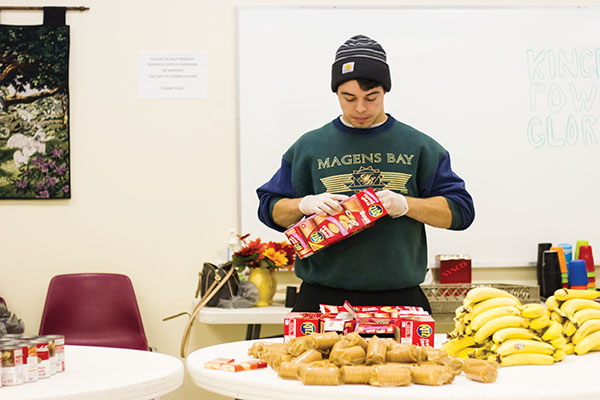 Making its debut last year, Cat Packs is a student organization that provides weekend meals to students at North Star Academy. The students are chosen due to their financial need and, in many cases, may not have a means of eating when school is not in session. The students qualify based on their acceptance of free or reduced lunches.

Senior political science major and ASNMU President Lindsey Lieck is one of the founding members of the organization. She currently acts as the liaison between the community supporters and the core group of volunteers.

“It makes a huge difference when you’re sitting in class if you have a full stomach or an empty one, no matter if you’re in kindergarten or a college student,” Lieck said.

In an attempt to keep the process confidential, the group has no direct contact with the students. A member of the group goes to the school office on Friday mornings and leaves the packs for students to pick up.

Each pack has the equivalent of six meals and typically consists of a bag of cereal and a packet of oatmeal for breakfast, bigger items, such as macaroni and cheese and ravioli, and one peanut butter and jelly sandwich. Snack foods like granola bars and fruit snacks are also included in the packs. Lieck said the students love the meal items but get especially high feedback from the fresh fruits and vegetables.

The goal, Lieck said, is to provide the students with enough calories to get them through the weekend and offer healthier options, like the fresh food.

The volunteers only spend an hour or so preparing the meals. That hour stirs emotions for second-year graduate student in higher education and student affairs Sara Pingel, who acts as a coordinator for the group.

“You don’t realize the impact one hour makes for those students. In that one hour, you’re giving an invaluable service of relieving an unneeded stress on a child’s life,” Pingel said. “Children shouldn’t have to worry about surviving and we’re helping ease that. It’s a right, not a privilege.”

Each pack costs around $6 to make, pushing the budget to nearly $360 a week for all the packs, according to Pingel. The funding for the food comes from fundraisers, private donations, local grants and large corporate grants. Lieck said the group recently received a grant from Wells Fargo. In addition, the group raised another $2,000 from a large-scale rummage sale. Pingel estimated the organization’s current budget around $12,000.

North Star Academy was the prime candidate for the assistance not only because the financial need was strong, but because the school hosts a wider range of students in the areas surrounding Marquette. Lieck said the school was easy to work with and was encouraging every step of the way.

“The program is amazing and the volunteers have gone above and beyond. The service that they’re doing is just so great,” McNeely said. “They’re creating a large difference and touching the lives of the students. I hope we can keep doing this program for as long as there is a need for it.”

The core volunteer group consists of eight to 10 people, though new batches of volunteers show up every week to help pack the lunches, Lieck said. Sign-ups are posted in several locations around campus, including the residence halls, but student organizations are encouraged to sign-up as well. She said she normally sees five to 10 different faces each week. When students are away on break, Cat Packs looks to NMU’s staff and faculty to help pack lunches. Community members have been known to join in on the packing, too.

The Salvation Army in Marquette acts as a host site for the lunch packers. Coldwell Banker Schmidtt Realtors also offer its hand in assistance. According to Lieck, the company’s Houghton firm has helped jump-start a similar program there. Seeing the community come together for such a great cause is very encouraging, Lieck said.

“It’s kinda like Northern is this great central organization and we have Marquette hugging us, giving us so much support and it’s awesome to see,” Lieck said. “Our community is so entwined with Northern and they support us so much. It’s great to see it in action.”

Packing takes place on Thursdays at 3 p.m. at the Marquette branch of the Salvation Army. Interested packers can contact the volunteer center to sign themselves or an organization up.