The sounds of soft wind and crickets greeted NMU world history students on Thursday, Oct. 22, when they participated in a video conference with a group of presenters in the West African country of Ghana. 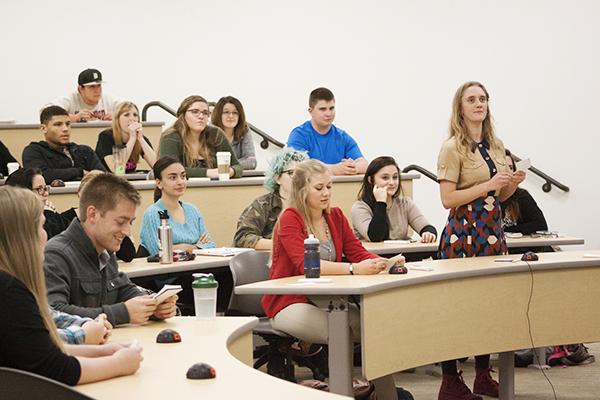 For the entire class period, they exchanged songs and dance, shared the history of Detroit’s Motown Records and took a guided virtual tour of the once infamous Cape Coast Castle and its slave dungeons.

Leading the class, professor Kathryn Johnson said she has a history of integrating technology into her curriculum. “I’ve done Ghana four times now,” Johnson said. “But in the past we’ve video conferenced with Fulbright scholars from Egypt, Syria and China, as well the Smithsonian Native American and African Art museums.”

The use of technology, Johnson said, is a way of introducing students to distant subjects often only found at larger, more urban universities or through traveling abroad.

“It’s a great way to connect nationally and internationally with experts we couldn’t otherwise bring into the classroom,” Johnson said.

Ghana is four hours ahead of the Eastern time zone, and it was already dark when the classroom linked up with the presenters. A large band was assembled outside along with several young and enthusiastic students who had come to share a story or explain Ghanaian culture. Palm trees swayed in the background as they greeted NMU with a song they had entitled “Hello and Hi,” which included an array of singers as well as a saxophone, electric guitars and drums.

“I thought it was wonderful,” senior communications major Kate Dohnal said. “The people in Ghana were extremely enthusiastic, very knowledgeable and passionate. I think it’s an amazing thing that we are able to connect with something that is so personal to their culture and people.”

Dohnal, along with teaching assistant Zach Kitzman and other students put together and presented a short history of Berry Gordy and the founding of Detroit’s Motown Records as a way of sharing a little bit of Michigan culture. Kitzman has been a TA for three semesters, and has participated in four of Johnson’s video conferences.

“Ghana is definitely the highlight of our video presentations,” Kitzman said. “It’s easy to teach history, but it’s not easy to teach perspective. What video conferences give us is another perspective to look at.”

Once the song and dance had concluded, the conference took a more serious note. From 1665 to 1807, Cape Coast Castle was the last stop for many Africans in the British transatlantic slave trade. Upon arrival, men and women were segregated and crammed into filthy dungeons, often with no light whatsoever.

Those who survived slept standing up in their own excrement until it was time to pass through the “hole of no return,” a small door leading from the castle to the sea.

From there, they would depart via ship to spend the rest of their lives in servitude, often in the North American colonies. The sobering guided tour through the castle and dungeons left an indelible reminder of the centuries of pain and suffering endured within its walls.

Beyond subjects such as this, the technological capabilities offered at NMU have far-reaching potential, Johnson said.

“I think NMU has an opportunity to develop our own video conference programs that we can share with the rest of the world,” Johnson said. “This would present opportunities for students to engage in academic service learning projects working closely with faculty.”

According to Johnson, professors should plan their learning objectives ahead of time so students know what to expect.

The cost of video conferencing can vary depending on the content. The Smithsonian offers their programs free of charge, while other museums and nonprofits generally charge a fee between $100-200, though the history department did cover the costs for this particular course.

No extra fees are incurred for using the NMU audio-visual services.