Actor, filmmaker and author, Sean Astin, visited NMU to share his experience in the film industry through his talk “Life Lessons from a Career in Film”. He shared these “life lessons” on Tuesday, Oct. 3 in the Great Lakes rooms in the U.C. 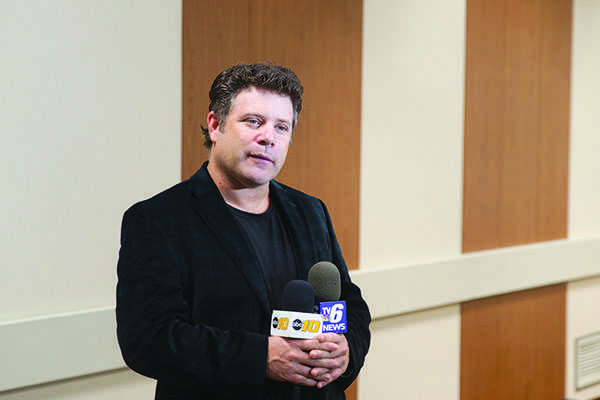 “He aligns with our mission of bringing inspirational, motivational, and educational speakers to campus,” Ben Harris, president of Platform Personalities, said. “We’re really excited to be able to bring such a well-known individual to campus: we feel that someone who is more recognizable will get more people excited and get people to come to our events.”

“Sean Astin is a major advocate for literacy and mental health issues. These are two very pressing issues in society today, and it is important to raise awareness,” Matt Trefilek, Platform Personalities chairperson for the event, said.  “The mental health issues also coincide with NMU’s Diversity Common Reader Program, because the theme this year will be mental health.”

Growing up, Astin was raised by his mother, Oscar winning actress Patty Duke, and adoptive father, actor John Astin. Surrounded by show business, Astin found his passion for acting young. His first role was in the television movie “Please Don’t Hit Me, Mom” when he was just 10-years-old. In the movie, he played a child with an abusive mother, portrayed by Duke.

In real life, Duke struggles with bipolar disorder. This led to an occasionally unstable childhood for Astin and his younger brother, Mackenzie, until Duke was diagnosed when Astin was 11-years-old. Since his mother’s diagnosis, Astin has been an outspoken advocate for mental health awareness.

The first major role Astin had was playing Mikey Walsh, the charismatic and asthmatic protagonist of Steven Spielberg’s “The Goonies.” The movie became an instant classic, and gave Astin a strong start in the film industry.

Astin further pursued his film career after graduating high school. He made a point of always trying to maintain honesty and integrity in an industry that is not always scrupulous.

Despite the tough industry, he was able to continue to wrack up an impressive resume, including directing a short film with his wife Christine entitled “Kangaroo Court.” The movie was nominated for an Academy Award for best live action short film. He made a point of always trying to maintain honesty and integrity in an industry that is not always scrupulous.

Astin starred as the titular character in the 1993 biopic “Rudy.” Astin has said that he relates to Daniel “Rudy” Ruettiger, feeling himself an underdog in the film industry because he is unwilling to compromise his character.

“With ‘Rudy’ I realized that you can have dreams. It’s OK to let those dreams exceed your grasp,” Astin said.

Despite playing iconic roles in “The Goonies” and “Rudy,” Astin’s big break came after he portrayed Samwise Gamgee in Peter Jackson’s “The Lord of the Rings” trilogy. The movies, which were released in 2001, 2002 and 2003, were greeted with high critical and audience acclaim, as well as many Oscar nominations. Astin himself won a Saturn Award for best supporting actor for his performance in “The Lord of the Rings: The Return of the King.”

From 20012-2014 Astin hosted a radio program called “Vox Populi.” The purpose of the radio show was to bring political awareness to those who are only “occasionally interested.” It advocated participation in politics and talked about it in a way that made it understandable. Astin continues to urge civic awareness and participation.

In recent years Astin has used his star power for philanthropy. He created the campaign Run3rd to spread awareness and raise money for a variety of organizations through running. The idea of the campaign is to gain sponsors for a race, and then donate the money raised to a charity or group in need. Most recently, Astin ran in the Ironman World Championship in Kona, Hawaii in order to raise money for after school running programs.

Astin said how happiness for him wanes and waxes, as it does with any other person. Being an actor has provided him with many of the opportunities that have been presented to him, but what really makes him happy is continually seeking new opportunities.

“Living life with a sense of mission—that’s what happiness looks like to me.”