NMU’s hunt for the GLIAC tournament tightened this weekend with a  pair of upset victories over the country’s top-ranked Ferris State University Bulldogs and their top rival Michigan Tech Huskies. 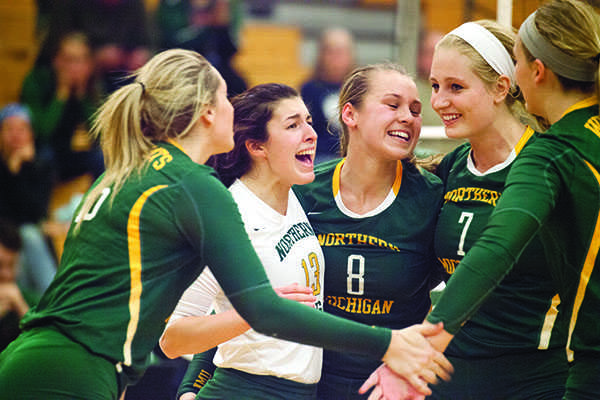 “I’m very proud of our team’s performance,” Yoder said. “We had a rigid game plan that we executed flawlessly. The win shows just how much talent we have on our team, and what we can truly be capable of down the stretch the rest of the season.”

The ’Cats became the first GLIAC team to beat Ferris this season, and second overall in the Bulldogs’ 25 opponents.

Ferris struck first in the opening set with a narrow 25-23 win over NMU. The ’Cats’ senior libero Alex Berger made a statement the next set, winning eight straight points to build NMU a 21-11 lead enroute their 25-12 tying set.

The No. 1-ranked Bulldogs came back in the third set to once again take the lead with a 25-23 win, but the Wildcats would not go down easily on senior day and responded with a 25-21 fourth set-win to force a fifth and deciding match.

Sophomore left setter Madison Whitehead said the win as a showcase of hard work paying off.

“It was a great feeling, our team was playing together perfectly, and everything we worked on all season finally came together,” Whitehead said.

“It helped being senior night, we really wanted to give our seniors one last great match at home., We went in knowing we had nothing to lose and we gave it our all.”

NMU followed up Saturday’s win with a 3-1 victory of their rival Michigan Tech Huskies on Tuesday, Nov. 3 in Houghton.

“Michigan Tech is a very hostile place to play,” head coach Dominic Yoder said. “I’m very proud that our players overcame the stresses in the final sets. Berger’s 28 kills show how much this match meant to our seniors.”

The crucial wins moved the Wildcats to 7-7 in conference play, giving them a hold on the eighth and final playoff seed for the GLIAC tournament. The ’Cats are tied with Northwood, and are now one game behind Tech with four games remaining in the regular season.

This weekend, NMU will be on the road against the Wayne State Warriors at 7 p.m. on Friday, Nov. 6 and will conclude the road trip at Saginaw Valley at 2 p.m. on Saturday, Nov. 7.

“We’re really focused on learning from each game and building off every performance,” Whitehead said. “At this point we know what team we have and the adjustments we have to make. It’s going to be a tough stretch, and we’re focused on taking it one set at a time, one game at a time and getting the best seed we can in the tournament.”