Wildcat hockey gets a leg up on Bemidji

The NMU hockey team takes on University of Alaska Fairbanks on the road after a weekend at home hosting Bemidji State University. 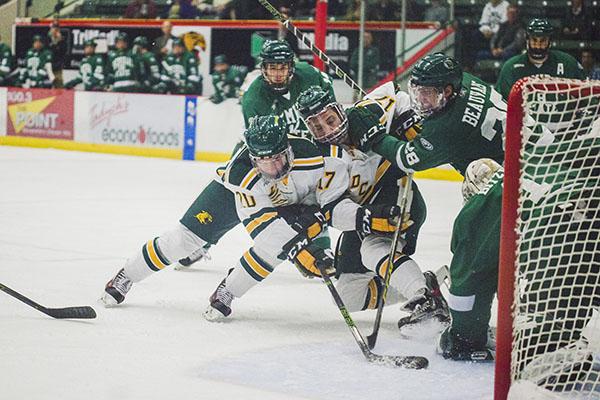 The showdown this past weekend between two Western Collegiate Hockey Association honored goalies caused a 1-0-1 record for the Wildcats in the series against the Bemidji State Beavers.

Freshman goaltender Atte Tolvanen posted a career-high 46 saves for the Wildcats during the Friday, Oct. 30 game at the Berry Events Center.

“We still have to grow,” head coach Walt Kyle said. “There’s still a lot of room for improvement with puck movement. Lately we’ve been protecting one-goal leads-guys have been trying to be cute and turning pucks over. We also have to be more efficient on our power plays-we’re generating some good chances but we have to find a way to get it in and score.”

Sophomore goaltender for the Beavers Michael Blitzer was named rookie of the year by the WCHA for the 2014-2015 season. He made 22 saves for Bemidji during Friday’s play.

After many opportunities to put away the puck during the 60 minutes of regulation as well as overtime, the game ended with 0-0 tie.

The ’Cats returned to home ice Saturday, Oct. 31 to finish the series with the Beavers and came out ahead with a 3-1 victory.

Sophomore forward Robbie Payne leads the Wildcats in goals after a pass from junior forward Shane Sooth gave the Wildcats their first point of the game and Payne’s fourth goal of the season.

Senior forward Cohen Adair got his first goal of the year when he put away a pass from freshman forward Denver Pierce.

With only four seconds left in regulation senior forward Darren Nowick fired a shot into an empty net after a face-off, increasing the lead to 3-1 to end the game.

“We were much happier with our effort [Saturday],” Kyle said. “We still need to get better in a lot of areas but it was a big step forward.”

Tolvanen stopped 80 out of 81 shots during the weekend, leading him to receive defensive player of the week from the WCHA. This is the second week in a row that the rookie goalie has been honored by the conference and the third time this season. Tolvanen was given rookie of the week for the weeks of Oct. 4-11 and 19-25.

The NCAA recognized Tolvanen on Tuesday, Nov. 3 as No. 2 out of three NCAA hockey stars of the week.

“Every game I’m trying to play as well as possible,” Tolvanen said. “Things are going great right now. Our defense is clearing the puck well so I can see it all the time, and whenever I give up rebounds our defense is there to clear it out.”

The Wildcats take on the University of Alaska Fairbanks Nanooks at 11:07 p.m. on Friday, Nov. 6 and Saturday, Nov. 7 at at the Carlson Center in Fairbanks, Alaska.

The Nanooks are ranked nine out of the 10 teams in the WCHA with their 0-2 conference record and 2-4 overall. In the six games the Nanooks played so far this season the two wins they did receive were on their home ice, even beating the American International College 7-2.

Junior goaltender for the Nanooks Davis Jones has a save percentage .897, posting 639 saves in the 27 games played for Alaska.

During the Friday, Oct. 30 game against the Minnesota State University-Mankato Mavericks, Alaska allowed three goals against them in the first period. In an attempt to make a comeback Alaska made two goals within the first five minute of the second period. The rest of the game remained scoreless for the Nanooks as the Mavericks pulled farther ahead to finish with a 5-2 win.

Even with the trip to Alaska, easily the farthest they have to travel for games, Kyle said they’re always preparing the same way.

“It’s a long trip,” Kyle said. “Players have to concentrate on taking care of their bodies and get fully rested.

“From our guy’s perspective, we have a good attitude right now. We have our small goals we have to work on, and we’re getting better each day.”