After missing nearly two seasons due to injury, sophomore guard Anna Liewen is finally returning to her spot in the starting lineup NMU when the team starts their 2015-16 season. 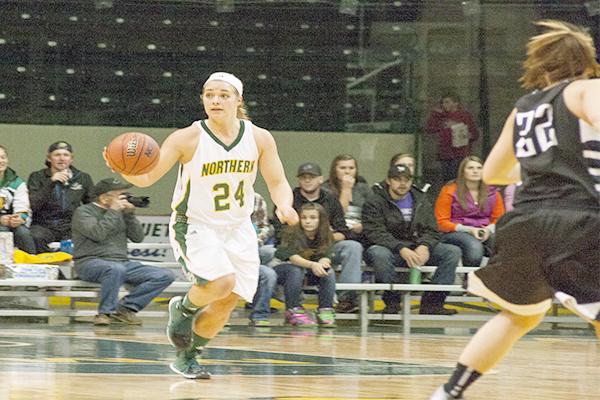 “She’s definitely put in the time and effort that it takes to come back from a major injury,” NMU head coach Troy Mattson said. “We’ve definitely missed her presence the last few seasons, and she’s a key addition to have back, especially with such a young team.”

In December 2013, Liewen was in the midst of a successful second season at NMU starting all six games the team had participated in averaging 18.5 minutes per game.

The Wildcats were tied for first place in the GLIAC standings, and were hosting the Malone Pioneers Dec. 3.

Much of the success was due to the talents of Liewen, who was leading her team in rebounds averaging 6.2 per game. She was also amongst her team’s top scorers with 9.2 points per game.

Liewen was having another successful game against the Pioneers, grabbing her team eight rebounds and leading her squad in scoring with 15 points.

But with 11 minutes remaining in the game, Liewen would go down with a leg injury that would would halt her play and take her out of the game.

Further X-rays would reveal that Liewen had dislocated her kneecap and tore all the cartilage underneath, ending her season and leaving her future questionable.

“She was a devastating loss,” NMU head coach Troy Mattson said. “We weren’t sure if she would ever play the game of basketball again. She’s a very talented player with true capabilities, and to see her go down was heartbreaking.”

The following season, Liewen was not yet cleared to play when the Wildcats began their defending championship season, and would not be ready to return to the team until midway through the year. Liewen decided to sit out the remainder of the season, giving herself another full year of eligibility.

“It’s been a long and hard process,” Liewen said. “In those situations, you always have to keep pushing hard and staying motivated with goals in front of you to play again. I always wanted to get back out with the team, but I had to make sure I was 100 percent and do everything the right way.”

While some wondered if she would ever see the court again, Liewen said there was never a doubt in her mind.

“I always knew I was coming back, it was just a matter of when,” Liewen said. “It was basically keeping that goal in mind that someday I would be back and helping this team win games.”

Liewen would not return to the lineup for the 2013-14 season, but saw her team finish second in the GLIAC regular standings before going on to win the 2014 GLIAC tournament championship.

The ’Cats would advance to the NCAA tournament, but Liewen’s absence was felt in the opening round against the Quincy Hawks when the Wildcats were outrebounded 45-38 in their seven-point overtime loss.

Two years later, the roster has turned over and Liewen is in her fourth year at NMU, and understands what she has to bring to a young roster with her experience.

“I need to bring a lot leadership to these players,” Liewen said. “All of them to know how to play, it’s just learning what to do in certain situations on the court. You need to be confident to be successful in this league, and I think we need a lot more confidence on this team by getting into their heads and make them realize they’re all really good players who just need to step it up.”