“This is an issue that is confronting the entire community and the issue is dark stores,” former Mayor Robert Kulisheck said at the Ramada Inn on the evening of Thursday, Nov. 5. 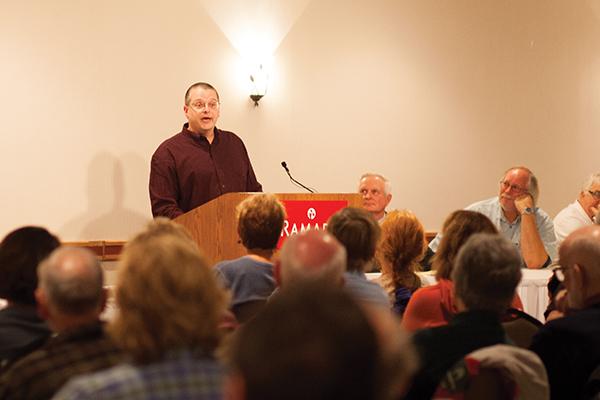 “Dark stores” is a term that describes vacant, blighted or abandoned properties that once served as functioning businesses for large retail chains like Lowe’s, Meijer, Target and others.

In the opening of the forum, Kulisheck, who served as the moderator of the event, said there is a “financial tsunami” bearing down on local units of government in Marquette County. He also said this isn’t just an issue affecting Marquette, but the rest of Michigan as well.

The forum featured hundreds of community members young and old who were gathered in a bipartisan group to learn about  negative effects that dark store tax cuts pose on vital
community services.

The Peter White Public Library was forced to cut its operating hours and is no longer open on Sundays as a result of being forced to repay already collected taxes. If budget issues persist, the library may have to cut more hours and there could also be a large downsize of
municipality staff.

After the dark store tax policy was legitimized by the Michigan Tax Tribunal in 2010, most multi-billion dollar corporations statewide started taking this approach to getting property
tax cuts.

The Tax Tribunal, which is an administrative court that hears tax appeals for all Michigan taxes, ruled that the taxable value of retail property for big box stores could be determined by comparing the value of an open store to the value of another previously owned vacant or abandoned property.

Through what many consider to be a loophole, big box store locations that are fully operational are being evaluated, for tax purposes, as though they are these dark stores.

After mega-retailers move on from a location, property deeds that restrict what kind of retailers can move in are drawn up so that the unattended properties can’t be leased by other retailers who sell similar merchandise. These so-called “restrictive covenants” are believed to drive the taxable value of dark stores down even further.

Originally, the taxable values of stores were determined by calculating a formula that required them to be taxed at 50 percent of their assessed value based on construction costs less annual depreciation.

However, some mega-retailers, like Lowe’s in Marquette Township, are receiving repayment from cities they’ve chosen to set up in after their original construction costs were re-assessed using the dark store method of evaluation.

Lowe’s was originally assessed at a taxable value of $10 million to build, but after re-assessment it was revalued at $2.5 million. Now, that recalculation has resulted in the loss of annual tax revenue for the county on top of the massive sums of money local tax collectors must return to
the company.

Marquette Township is required to pay Lowe’s back for previously collected property taxes from the period of 2012-2014 that equalled
about $755,000.

In a growing effort to not only raise awareness but to also draw attention to the local stores committed to paying their “fair share” of taxes, small stores scattered around Marquette County have started the “Businesses Recognizing the Importance of Tax Equity” (BRITE) initiative. Stucko’s Pub and Grill is one of many BRITE stores which can be identified by the “BRITE” labeled signs located in windows.

Mike Stucko, owner of Stucko’s Pub and Grill, had a stern message for local big-box stores of Marquette County:

“Pick up your bag and carry your weight in this community or pack your bag and leave. If you want to be taxed like you are not open, then close.”

A lot of municipalities around the state, especially those in lower Michigan, have simply chosen to accept tax reductions from big-box retailers rather than wage costly legal fights to deter this loophole.

“Our opinion is that this is not a loophole, not a loophole at all.There is no loophole. It’s just a pure misapplication of the law by the tax tribunal.”

Several other property owners in the county have also filed for similar tax reductions
like Lowe’s.

Because of major losses in tax revenue, local units of government may have to reduce funding for public services and municipalities like emergency response and
public transportation.

This also means that more of the county’s tax burden will be shifted onto homeowners and small businesses.

Bills have been proposed from lawmakers of both political parties in order to keep big-box retailers from getting unfair
tax reductions.

Chocolay Township Supervisor Greg Seppanen said legislators have tried and failed to move the dark store legislation, which would help curb the financial damage that’s been done in the county, adding, “history is not on our side.”

“The legislation does not solve the problem, but it does stop the bleeding,” Seppanen said.