English and Education Professor Kia Richmond was presented with the Charles Carpenter Fries Award on Oct. 30 at the Michigan Council of Teachers of English (MCTE) conference in East Lansing. 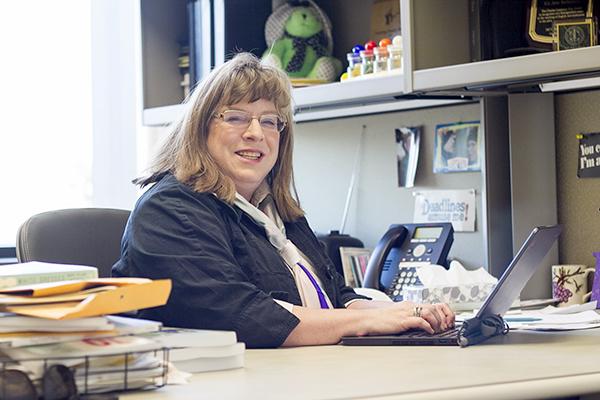 Richmond has been an educator in the English department at NMU since August 2001. She was nominated at the state level from a member of the MCTE board and was notified of her winning on Oct. 14.

“It was a shock; I had no idea. It was pretty exciting,” she said.

Richmond has been an educator for 25 years and describes her goal as developing relationships with her students. Richmond works to help students determine their own dreams and capitalizes on what they already know in order to learn from them, she said. She describes an emphasis on learning and growing together with her students.

Richmond places a strong emphasis on a sense of community within the English department, she said. The department is a family where educators and students are there to help each other grow, and the goal is to build a community of learners,
Richmond said.

“You’re not alone. You’re never alone when you’re a teacher,” she said.

Attending the conference along with Richmond was senior elementary education language arts and science major, Briana Ormson. Ormson has taken one class with Richmond and recommends all students going through the education program take at least one class with her, she said. The education program can be stressful, but with inspirational, passionate and energetic teachers such as Richmond, students can be encouraged to keep going when things get difficult,
Ormson said.

“I’ve never felt such a strong community of support as I have in the education program,” she said. “I feel like we really look out for each other.”

Richmond said students who have graduated from the English department are encouraged to remain connected to each other through resources such as a Facebook page. The students exchange ideas, answer questions and offer support to their peers, past and present, she said.

“Just because you’re graduating and moving away doesn’t mean you’re not still a Wildcat,”  Richmond said.

Richmond spoke of connecting her students at NMU with poor, rural schools that lack good resources. She uses grants to help people in the education field get books and create new experiences in their classrooms. The goal in connecting grade school students with her NMU pupils is to get the youth to begin thinking about a future in college
and literature.

“It’s kind of like the Grinch; my heart grows three sizes every time I work with students,”
Richmond said.

Richmond attended the 2015 MCTE conference to receive her award. She was also one of the multiple speakers at the conference. Richmond said this year’s event had a large attendance of over 300 English educators
and professors.

Other awards presented included the high school, middle school and elementary school teachers of the year. The MCTE conference is designed to identify excellence within teaching. The criteria for the Fries Award includes distinguished leadership, inspirational qualities, originality, academic superiority and a membership with the MCTE.

Richmond said some of the best advice she gives to students is to join a national or state organization. Students should rely on their relationships with peers within the NMU English department as well the support given by organizations such as MCTE, she said.

“That’s what’s going to sustain you,” she said. “I’ve been teaching for 25 years, and I would have never made it if it hadn’t been for my state organization and my national organization.”