“If you involve other students in your suicidal or self-destructive thoughts or actions you will face disciplinary actions.”

NMU and social media were buzzing Thursday after an email containing these words was sent out on Wednesday, Nov. 11 regarding the school’s policy and procedures related to mental health. 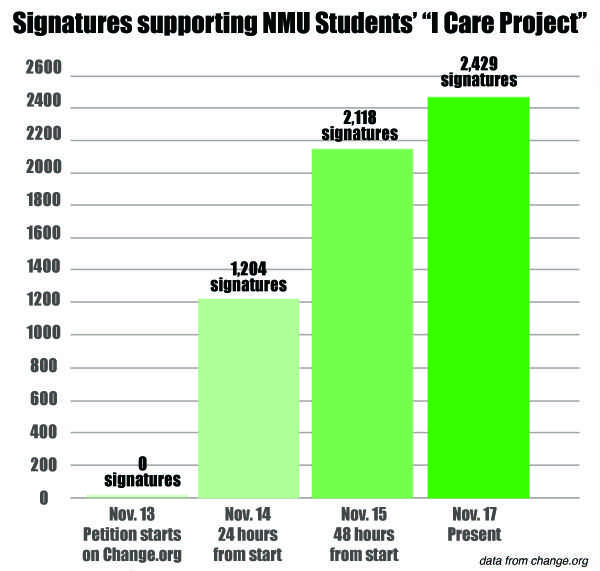 The email was sent to 14 students, according to Christine Greer, dean of students and student services. It provided information as to what procedures they should follow if they are feeling depressed, suicidal or intending to self-harm.

The email, sent out by the dean, stated that if students should experience an “emotional crisis during regular office hours” they should contact the NMU counseling center. However, if an “emotional crisis” should occur outside of business hour, they should either contact their resident advisors, resident directors, Community Advisor or Public Safety. The email advised students who were having an emergency or intending to commit suicide to go to an emergency room or call 911.

“It’s all about the wording. This is such a gentle subject. This email could be a lot longer and a lot more specific,” Thornsberry said. “It needs to be said with more love and they need to be more careful with who they’re speaking to.”

Derek Hall, assistant vice president of university marketing and communications, stressed that there is always somewhere a student can turn to for help, even outside of the counseling center and health center hours. Resident advisors, directors and Public Safety are all trained to assist students facing psychological crises.

There was outcry over the statement of NMU’s student procedure that students cannot talk to others about their “suicidal or self-destructive thoughts” or they will face “disciplinary action.” This, according to Greer, is part of the student code that prevents a student from disrupting another student.

“The purpose of it all is to get these students, these very specific students, in front of professional help, face-to-face, and not relying on friends and roommates,” Hall said.

Discussions of suicidal actions, according to the email, “interferes with, or can hinder, [other students] pursuit of education and success in the NMU community.”

“I think it’s important to know that we don’t just hear about a student talking to other students and charge them,” Greer said. “This is after a meeting and talking about what resources are available on campus and off campus. It’s after a discussion about how disruptive it can be to involve other students in their behavior.”

Greer emphasized that discipline is not the first action that the dean’s office takes. Students are disciplined when they continue these behaviors after discussions and being advised to seek professional help. The procedure is in place to encourage students to seek help for psychological issues they are experiencing.

Hall added that in some situations the university can legally mandate counseling for students in need.

Greer said that the school has seen many cases where one student’s suicidal actions, and discussion of these actions, have greatly affected other students.

“We’ve seen students be pulled into some terrible situations where they feel personally responsible for someone’s life, and that does affect them. They end up in the counseling center, or they end up failing classes.”

In response to the email, a group of students called the “I Care” organization created a petition online to remove policy 3.12 from the student handbook. The petition received over 1,200 signatures in the first 24 hours and currently has nearly 2,500 as of press time. The petition has made 10 demands, including the removal of the policy 3.12, which pertains to self-destructive behavior.

Section 3.12 does not include the procedure for disciplining students, but outlines how a student can withdraw from the university on a voluntary psychological withdrawal, Greer said.

Greer said in response that the dean’s office gained knowledge of the behavior of the students who received the email not through the Counseling and Consultation Center, but through reports made by resident advisors and directors as well as public safety. She also said that NMU hired a new psychologist for the counseling at the beginning of November.