The Wildcats dropped their regular season opener to the University of Minnesota Duluth Bulldogs by a score of 79-67 on Tuesday, Nov. 17 in Duluth.

The ’Cats jumped out to a 7-0 lead to start the game, but the Bulldogs responded with a 46-26 run the rest of the first half to take a 13-point lead into the locker room. 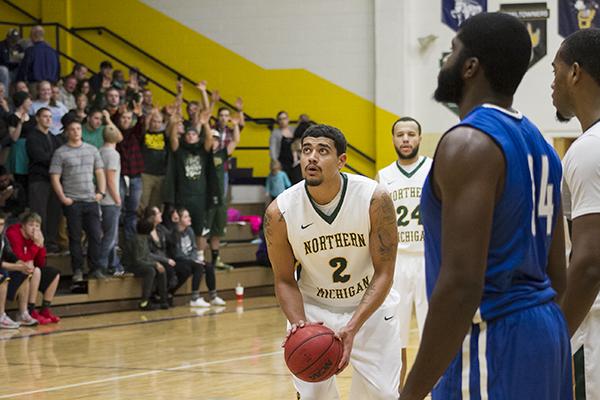 In the second half, NMU improved their shooting percentage from 38.9 percent to 41.4 percent, with an effort that outscored Duluth 34-33 in the half to cut into the Bulldogs’ lead. The comeback came up short in the end, with Duluth taking the 79-67 win.

“Duluth is very similar to everyone we’re going to play on the road in the GLIAC. It’s good to get that first taste of a road game,” Sall said. “To go into a good environment with great basketball tradition, it’s an important step for us moving into the right direction.”

Sall spoke earlier in the week on Perez and Echols’ improvements for the 2015-16 season.

“It’s great to see that we have some young talent,” Sall said. “Both guys have been playing pretty well and doing some amazing things, which are signs of things to come. Now we need them to find the next improvement level and step up scoring and distributing like we want them to play.”

Tuesday night’s match was the second road trip in five days for the ’Cats, coming off a road match against the University of Michigan Wolverines on Friday, Nov. 13 at the Crisler Center in Ann Arbor, Mich.

“We’ve certainly made a lot of improvements,” Sall said. “We’ve improved well on the defensive side. We’re a ways from finding our identity on offense, but we have capable players, and we’re going to be successful playing small ball. It’s important for us to figure out what we look like playing
against Division II teams, so these next few weeks will give us a good idea of where we stand and what we have to do.”

With this week off, NMU will next travel to Owensboro, Ky. to participate in the Kentucky Wesleyan Classic tournament over Thanksgiving weekend.

Sall said a break from classes will be beneficial for the team to increase their skill.

“It’s important from a basketball standpoint to have the chance to focus in on just basketball for a few days in a row,” Sall said. “Through injuries and playing games on the road we haven’t had a week to just worry about us, and it’s huge that we have the opportunity to do that.”

“Those tournaments show you where you’re at as a program,” Echols said. “It gives you a chance to play against good teams outside of our conference and see how we match up with some of the best teams in the country.”