The Northern Michigan University cross country team will be traveling to Joplin, Mo. to compete in the NCAA National Championships on Saturday, Nov. 21.

The Wildcats placed fourth at the NCAA Midwest Regional on Saturday, Nov. 7 to qualify for the NCAA National Championships. 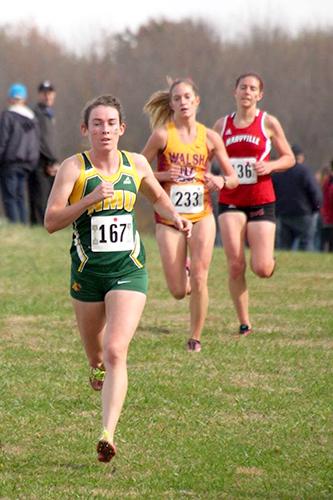 “The day of the Midwest Regional was very exciting,” head coach Jenny Ryan said. “The team ran well and had a strong performance. It was definitely a team effort and exciting to finally make nationals after being so close the last two years.”

Burmeister and McDonald were named to the all-Midwest Region team on Monday, Nov. 9 after placing in the top 25.

The ’Cats’ fourth-place finish at the regional meet was their highest finish since 2005, when they also finished fourth.

The Wildcats will be competing in the NCAA National Championships on Saturday for the first time since 2005, when they finished 16th.

“We are all very excited to be going to National Championships this weekend,” Burmeister said. “We have worked very hard to get here, and it is so surreal to actually be heading to Joplin.”

The team has been working extremely hard in preparing themselves for the big race.

“After the regional meet we went right back to work,” Ryan said. “The week after the meet we had a tougher training week with increased mileage and intensity. We will taper this week so the athletes are prepared to race their fastest races of the year.”

The Wildcats are one of three GLIAC teams to be competing in the field of 32 on Saturday, along with No. 1 Grand Valley State and No. 3 Hillsdale.

No. 9 Lewis, No. 14 Southern Indiana and No. 22 Wisconsin-Parkside also qualified out of the Wildcats’ Regional.

Ryan and the team are excited for the big race.

“Making it to the NCAA Nationals in any sport is very difficult to do and does not happen very often,” Ryan said. “We all work hard to get to this point, and it is exciting to actually do it. It is truly a special experience, and the athletes all want to compete the best that they can for their university and make NMU proud of them.”

NMU has made it to the big stage before, accomplishing the feat for six straight years, from 2000 to 2005. Their best finish came in 2002 when they finished fourth.

The Wildcats will be ranked 11th for the race after their finish in the regionals in the USTFCCCA Division II coaches’ poll that was released on Wednesday, Nov. 11. NMU has appeared in the nation’s top 25 in all eight polls this season and have made the top 10 six times, being tabbed as low as eighth.

“This season has been very exciting,” Burmeister said. “I couldn’t be happier to be a part of this wonderful team here
at NMU.”