A last-second field goal caused the NMU football team to fall to the University of Findlay Oilers on Saturday, Nov. 14 at Donnell Stadium in Findlay, Ohio.

“I’m excited. I think our guys worked hard,” head coach Chris Ostrowsky said. “I think they came ready to play and committed to the deal. They played with the product that we are.” 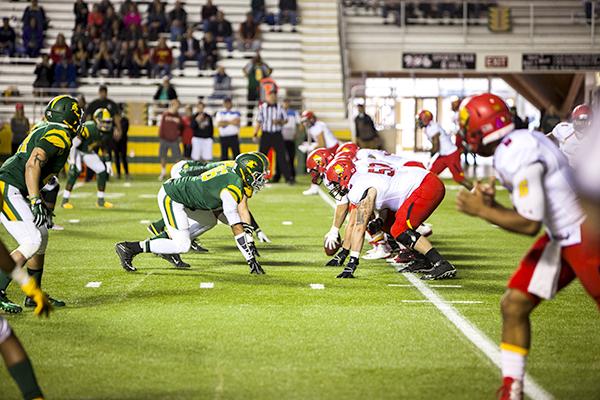 After the Oilers leapt out to a 7-0 lead, the Wildcats responded with back-to-back touchdowns when junior quarterback Shaye Brown found sophomore wide receiver Keyondre Craig for a 28-yard touchdown. Brown threw the second touchdown five yards to senior wide receiver Trey Hipke. Findlay responded, tying the score at 14-14 to end the first.

Just seven seconds into the second quarter Brown found Craig again for a Wildcat lead, 21-14. Freshman running back Jake Mayon ran a seven-yard touchdown before the Oilers came around to score two consecutive touchdowns to tie the game 28-28 going into halftime.

Points were traded during the third quarter. Senior running back Terrance Dye ran in the fifth Wildcat touchdown of the game.

Then Mayon scored the final touchdown of the game for the ’Cats in the fourth quarter.

With just under five minutes left in regulation, Findlay regained possession of the ball and ran it 56 yards down the field. At the 30-yard line the Oilers took a field goal that won them the game. The Wildcats fell to the Oilers 45-42.

“It came down to making the play,” Ostrowsky said. “And they made one more than us.”

Brown passed 264 yards in the game, securing his record in single-season passing yards. Brown is the first Wildcat to surpass 3,000 yards in a season, finishing with 3,123 yards.

Senior wide receiver Marcus Tucker was named all-GLIAC first team for leading the team of wide receivers this season. Tucker averaged 7.2 receptions per game and tied for fifth with his nine touchdown catches.

During the game against Quincy on Saturday, Sept. 12, Tucker became the eighth Wildcat in history to catch three touchdown passes in a single game to win the game 31-14. He received for 205 yards that game, the highest amount of receiving yards this season.

Steuck started every game this season for the Wildcats and played 44 games in four seasons he played for the ’Cats.

Perry averaged 7.7 tackles a game and during the Saturday, Oct. 24 game he posted 10 tackles.

Salani averaged 39.6 yards per punt, and 13 punts were inside the 20-yard line. During the Saturday,   Nov. 7 contest against Ferris State University Salani multiple times turned the field in the Wildcats’ favor. He recorded a season-best three punts within the 20 during that game.

“It is a great honor and a pleasure for us as a football program to celebrate our all-conference players,” Ostrowsky said. “All are very deserving and were great ambassadors for our program.”