Editorial: Black Friday brings out the worst in us

For many Americans, the Thanksgiving holiday means spending time with family, enjoying good food and reflecting on what we’re most thankful for. It’s a time when people seem to relax a little, and strangers appear, at least for a while, a bit more courteous. 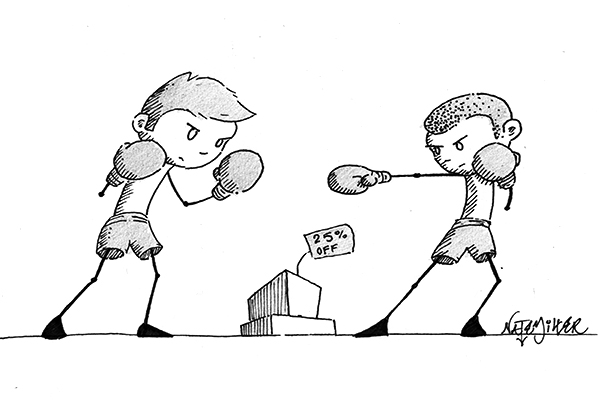 But for the last several years, the demeanor seems to have changed. When the food coma is over and  all the leftovers have been portioned and packed away in plastic Tupperware containers,  shoppers from coast to coast don their shoes and coats and head out to the malls and big-box stores for Black Friday shopping.

Realistically, the combination of overindulgence in food should go hand in hand with dropping big bucks on some of the best deals of the year—and it does.

In the past, the allure of getting up early the day after Thanksgiving was enough for most. Today, customers sometimes start lining up hours—even days before the start of a sale.

They endure long hours of frigid temperatures and miss time with their families for a chance to duke it out over flat-screen televisions and combination waffle makers.

This is where it gets ugly. In recent years, as stores have begun their sales earlier and earlier and their deals have gotten sweeter, customers have become more and more frantic when the wide-eyed clerk finally opens the doors and lets them inside.

Brutal fights have occurred between individuals who were giving thanks just hours before.

People have even been killed—trampled under the feet of throngs of oblivious shoppers who cared more about a $10 toaster than the life of a stranger.

Things have changed a bit on the part of the stores. Instead of allowing a free-for-all stampede, quotas have been placed on how many people can enter the store at a given time.

Some retailers have even instituted rain-check policies for sale merchandise, so that everyone who enters the store on a sale day is guaranteed the item they’re looking for, even when stock runs out.

That’s a good sign, but it’s sad we’ve had to endure tragedy and watch our fellow human beings devolve into rabid animals to get to this point.

This is a teachable moment, but it doesn’t necessarily give us hope for humanity either.